Skip to content
NSFW Warning/Disclaimer:
PA (short for “Profound Assholes”) is a series on SpeedontheBeat.com where I have a no-punches-pulled conversation with a friend about a hot-button issue (yay cliches!). That friend is usually none other than Drizzle Sez formerly of DrizzleSez.wordpress.com, who co-created the PA format (go check out his site. It’s still live and still kicks much ass to this day). Today, we discuss a “sacred cow” in anime: Neon Genesis Evangelion along with Eureka 7 and its sequel series. Why? We’ll get into that.

Speed: So, who wins in a blood feud: One Punch Man or Super Tengen Toppa Gurren Lagann?

Speed: The interwebs doesn’t think so.

And, yeah, I’m aware the GL I just showed isn’t actually STTGL. But, I’d rather go off concrete evidence before I start the circlejerk opinions. There’s still too much to be explored within One Punch Man that hasn’t yet, so the data’s inconclusive. So, with that said…let’s break out the brain bleach.

Speed: Well, Eva-1 could also, when merged with all the Reis and whatnot, bring forth the destruction, resurrection, and instrumentation of life as we know it. I would’ve gone Gunbuster versus TTGL. But, that’s…boring.

Drizzle: No. You’re misunderstanding me. Eva, the show, was straight bullshit.

Speed: Ah, ok. Well, I’m ready for this one. We’ve danced around it every now and again. So, why was Neon Genesis Evangelion bullshit?

Drizzle: Well, this is a business about motherfucking money. And Eva made motherfuckin’ money. After it blew all its–wait for it–

Drizzle: No. Eva made motherfucking money after it blew all its… 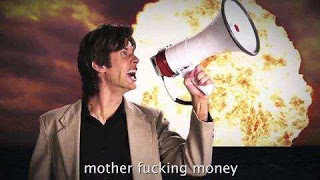 Speed: It made money pretty much to offset its original financial failures. This is true.
Drizzle: The last three episodes were absolute mindfucks. Do you know why?
Speed: Because Anno and Gainax blew all their motherfucking money?
Drizzle: Indeed. So, they lose all their money on their big finale that was supposed to explain everything and bring it all together in spectacular, giant robot action fashion. Instead…it spoonfed you bullshit. And not only bullshit. Incomprehensive bullshit.

Speed: So, back to our original question. Eva loses to TTGL because Shinji and company lose their funding before the final battle finishes, thus rendering Eva as a stick figure robot? Ok, now…continue with the mindfucking, brain bleach-requiring Neon Genesis Evangelion.
Drizzle: The masses ate it up, feeling like hipsters, because they derived some bullshit meaning from the bullshit that was so bullshit that the creators redid the damn ending–
Speed: At least twice. Now, the movies don’t really make up for the giant robot action, by the way, in the way it should’ve been made up. End of Evangelion just ends with everyone blowing up to bloody puddles and Rebuild of Evangelion still hasn’t finished–going on nine years since that series started. Hell, Eureka 7 does Eva better than Eva does. There, I said it. Again.
Drizzle: They should be ashamed.
Speed: Now, I still love Eva. But, I know it’s not the god series people make it out to be. It’s highly, highly flawed and the ending(s) are all horrible and end up coming off as giant “fuck yous” to either the financiers or the fans. Either way, that’s bullshit. Sue me.
Drizzle: And this is terrible because it’s what, from experiences and research and shit, upper echelon Japanese people do. They test your intelligence by shoveling you bullshit and seeing how much of it you eat.
Speed: Well, let’s look at all the fake deep anime that’s come out over the years.
Drizzle: Have you ever read The Man in the High Castle? Not the show. The show’s great and people should watch that on Amazon Prime–shameless plug–but I’m talking the book.
Speed: I haven’t in its entirety, sorry to say. But, I have an inkling as to where you’re going with this.
Drizzle: Chapter eleven has a deep moment where an American guy realizes that the Japanese guy has turbo mindfucked him. No condom, no lube.
Speed: Called it. But, that’s what Eva was and continues to be in so many ways. Yet, many don’t accept–or realize, rather–that they’re being mindfucked. Instead, they go and say they’re “smart” for drawing meaning from Eva that even Anno himself said wasn’t there and watching Eva over, say, DBZ during their upbringing.
Drizzle: Now, back to High Castle. The white American was mindfucked into saying white people can’t do shit ‘cept make garbage and when the white guy realizes it, he demands an apology. Us glorifying NGE is us admitting we suck and not demanding an apology. And, I’m not even talking the whole “anime is usually better than American cartoons” issue we discussed a while back. Be ashamed.
Speed: As I said, E7 does Eva better. It deals with the emotions, religious overtones, racism, classism, philosophical ramblings, environmental issues and more and still had giant fuckin’ robot battles at the end instead of trying to make people draw meaning out of bullshit psychobabble that is more there to confuse people and, ever so slightly, make reference to, like, Sartre instead of finishing the fucking series.
Drizzle: I never finished Eureka 7. Do you know why?
Speed: No. Why?
Drizzle: I wasn’t entertained.
Speed: Fair assessment. It does have several “ummm…okay then. That just happened with no real consequence” moments. Still better than Eva and the E7 sequel series, Astral Ocean, which was just Eva with a bigger budget and more blue-haired sea aliens. No, no, no. Let’s be serious with ourselves for a second, E7 fans. The Coralians are pretty much mutant coral reefs.

But, back to AO. Fuck that show. It gives a perfectly fine show the “let’s make shit fake deep to make people think they’re getting more out of it than what we’re really putting into it” treatment. It’s even got the “teenagers in skin-tight plug suits because reasons!” fan service, an adult who’s kid is a pilot in his squad, alternate timelines because who-the-fuck-really-knows, non-human humanoids created out of, pretty much, thin fucking air and more.

No. Dai Sato himself could say to me “Speed, you should like this show” and I’d still say “fuck outta here.”
Drizzle: Well, somebody‘s getting his rant chair back out again. But, to reel you back in, E7 didn’t entertain me. Just like with the Indie Showcase, I maintain likability by my entertainment, not experience. I’ve got life for experience. I don’t give a fuck about art just for art’s sake. That’s not to say E7 didn’t entertain you–which, judging from your rant, it did–or anyone else. It just wasn’t worth over twenty hours of my life.
Speed: And I respect that fully. So…back to Eva?
Drizzle: Eva wasn’t entertainment nor art. It was a bunch of dudes–
Speed: From a pretty well-respected company–
Drizzle: Who realized they blew their budget and then fed people bullshit, knowing the masses would eat it up and pretend to be better for eating a bucket of bullshit.
Speed: Ok, ok, ok. But, what if we take EoE as full, 100% canon? Like, we disregard the episodes after Kaworu died and pick up right as Shinji is jerking off over Asuka? We go through EoE and end the series, officially, with “kimochi warui,” disregarding the Rebuild films as well. 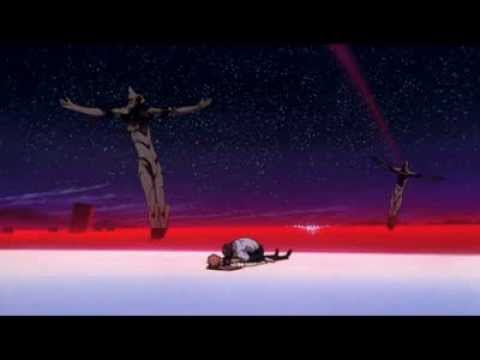 (Speed pauses)
Nope. It’s still ripe with bullshit. Iconic bullshit. Pretty bullshit. But, it’s still bullshit at the end of the day. And I say that as a guy who “used to sympathize with the Shinji Ikaris.” I say that as a guy who has an Eva tee in the style of the OBEY posters.
Drizzle: I’m just saying.
Speed: Anno knows, I feel, to some extent. I mean, I don’t see him retelling the series in all these different ways if he didn’t know he fucked up along the way somewhere.
Drizzle: (sing-songy) Bullshit.
Speed: Shrug it. The Eva designs, at least, looked cool. But, even I, a guy who, at one point, blatantly championed the series, finally realized it was on some sheer fucking bullshit.
Drizzle: NGE did what British people call “pissing on me and telling me it’s raining.” Enjoy your “iconic art,” ya dumbasses.
Speed: A Cruel Angel’s Thesis is this: People will wait for two decades to see the end of a series which should’ve ended the right way almost twenty years ago. But, it didn’t because Anno and ’em blew their motherfucking money. So, again, uber fans who are usually elitists will come back to the series again and again.
NGE made and makes money because people see the blown money of the original series (and its finale) as some sort of existentialist thought process, even though Anno himself said much of the imagery and meaning of the series is more fan-fiction than anything. Hell, Asuka’s final line in EoE, for some, had some sort of pregnancy overtones with it. Now, thankfully NGE did make a ton of money. If it didn’t, we never would’ve gotten Tengen Toppa Gurren Lagann, Panty and Stocking–hell, even Kill la Kill. But, at the end of the day, Anno and ’em fucked up with Eva.
…come at me, bros.
Drizzle: Sir, allow me. Ahem. If you think Eva is legitimately good as it stands, you’re hipster trash. 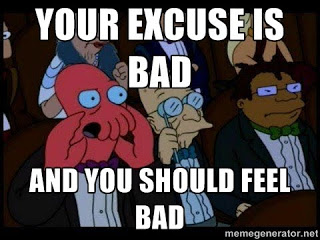 Speed: So, finally, let’s get back to the death battle, since that’s what started this one. Who wins in a fight: Eva-1 in its “I’m going to turn the world into blood pudding” stage or STTGL?
Drizzle: So, we’re going bullshit versus entertainment. Muddled “advanced” thinking versus the most awesome story I’ve ever heard in my entire life. 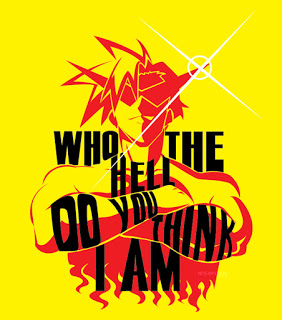 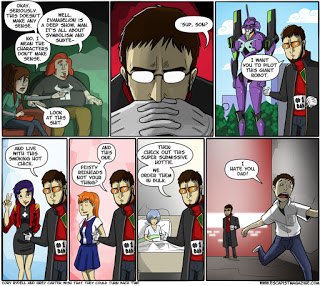 So, in closing, I also took a look at the “mature” Gundam series that just came out. Iron-Blooded Orphans.

The one that’s getting a lot of buzz because of its explanation of pilots, guerilla warfare utilization, child soldiers and shit. It’s pretty. It has potential. But, overall thus far? I can sum it up in four words. Those words are “meh. BUY THA TOYZ!”
Drizzle: What’d I tell you?