Skip to content
NSFW Warning/Disclaimer:
PA (short for “Profound Assholes”) is a series on SpeedontheBeat.com where I have a no-punches-pulled conversation with a friend about a hot-button issue (yay cliches!). That friend is usually none other than Drizzle Sez formerly of DrizzleSez.wordpress.com, who co-created the PA format (go check out his site. It’s still live and still kicks much ass to this day). Today, we discuss relationships and how to keeps yours from going up shit’s creek…most of the time.

Drizzle: Relationships, man. Like, Jesus H. Christ! I’m not even talking about my relationship. I’m talking about other peoples’ shit. Now, it’s always easy to say what should be done from the outside looking in. But, there’s shit that I know that I just wouldn’t deal with. But, while following my two rules, I, instead, will assist.

Speed: And those two rules…?

Drizzle: I used to have two basic rules that would halt any negative feelings in relationships. Ok, number one. When speaking to, or of, your partner, erase negativity. Remove negative words from your vocabulary about your partner.

Speed: Well, that goes without saying. As much as some of my relationships have, well, pissed me off, I strive to–even in those moments of sheer pissedoffness, not a word I know, to call them out of their name because that accomplishes nothing. I mean, if you can’t be positive about your SO, the fuck makes you think someone else will give them the benefit of the doubt.

Drizzle: True, but I’m talking even easier-like. Negative words, in this case, aren’t insults. I’m talking words like “no,” not,” “don’t,” “won’t,” and so on. Any word that changes the meaning of the sentence or word from positive into negative. The reason for this is so fucking basic that people don’t see it. Negative literally means “to take away or stop.” If you’re taking away from the relationship, then, by definition, you’re not adding to or sustaining it.

Speed: You’re setting it up to fail from the jump.

Drizzle: With the words! Also, by forcing yourself to speak positively, you force yourself to come up with solutions to active problems. For example, when you don’t say “I don’t want to do ‘X’,” you force yourself to say “I want to do ‘Y’.” It will scare you how much this will improve your personal disposition to your situation. That hopelessness feeling of “there’s nothing that can be done?” That’ll be gone because you’ll start coming up with solutions subconsciously. You’ll stop giving up.

Drizzle: The second thing of the original things? Stop pointing the finger!

This is also known as “whenever a situation arises that you don’t like, ask what YOU could’ve done to make shit better.” Too many times I hear how it’s always everyone else’s fault when the unbiased viewer watches you escalate that shit. You can’t fix other peoples’ problems and internal bullshit. BUT! You can fix yours.

So saying “if they weren’t such a dick–” Nope! “If I was more patient,” “If I called him his name instead of ‘pussy’,” “if I bought her flowers instead of beer!” These work better. Why? Because next time, you can actually do that and fix the problem! Now, I ain’t saying that if you do this, then shit will be perfect. Nope. But, if you both do these things, then things will get better.

Speed: These are also things that make sense.

Drizzle: Indeedly. Now, I said I need to add another thing to my list. But, while saying that, I now need to add two. New thing number one! Don’t have hypocritical expectations.

Speed: People are people, not superpeople. Or, ya know, don’t say I can be a manwhore but she’s gotta be Mother Teresa or it’s deuces.

Drizzle: Nothing builds resentment faster than thinking “oh she can do XYZ and I’ve gotta hold my tongue. But when I do a hint of the same shit, she gonna pop off.” It’s stupid. Why you expect more from them than from yourself?! Do you think they’re better than you?

Man, I watch a dude come in from work and his girl asks “what happened at work?” He lost his shit saying “I just got home and you’re grillin’ me and shit?” But when his girl gets home, he wants to get in her fact about her spending. And he wonders why she sneers at him. I gave a man example, but this is really prevalent with women. No, not because women. It’s because society is sexist.

It teaches, mostly, for women to depend on menfolk. So, the women who take this expect niggas to do shit but they then expect nothing from themselves. I lived this situation. Girl asks me “wha have you done for me lately?” I respond with this. “Other than have you in my house and you pay no bills, drive my cars but pay no notes, go out with me and pay no tab? I don’t know. What have you done for me, ever?”

Y’all supposed to be EQUALS in a good relationship. That ain’t monetary. Be for each other. Can’t expect people to care about you when you don’t care back. Can’t expect them to listen to your problems if you scoff at theirs.

And the last thing while I’m on my soapbox? If you want to have a good relationship, remember this. If you take nothing else away from this, there are other things in the universe. Stop taking everything so personal. It’s so easy to be the vain person and think this song is about you. 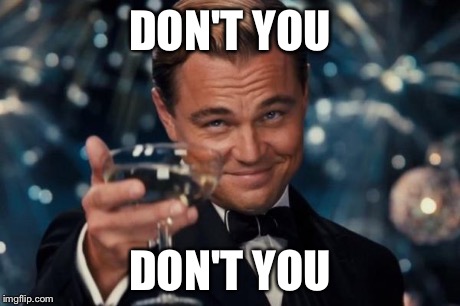 Yep. We had to go there. Shrug. Couldn’t resist. But, we like to hear stories other people tell and think they apply directly to us. It gets worse in a relationship. We subconsciously feel responsible for our sig figs’ emotional shit. So, when they complain about work, or people, or whatever, people take it as a shot at them. All this does is cause tension and make people thinking they can’t talk to you without raising up.

So, let’s recap. If you want a good relationship, follow these four rules.

If you do this, and your partner does this, your relationship will be much easier.
Speed: I haven’t chimed in in a while. Plumbing troubles.
Drizzle: Still?
Speed: Yeah. Don’t ask. Is there a fifth rule, or are you pleading it?

Drizzle: FIF. But, naw. Forreally, though. Most mistakes, most anger, most resentment? It’s spawned from people not doing that shit. Sure, there’re other problems in relationships. But, at a nexus, following these rules could solve–or at least identify–the issues. So, go fix your issues, motherfuckers!
Speed: And scene.
Drizzle: BIAAAAAAAAAAAAAATCH!