Let it be known that I’m not part of “Woke Twitter.” I just call bullshit like I see it. If that makes me “woke” in your eyes, so be it. But, I’m not out here perpetuating the stereotypes people have about “Woke Twitter.” 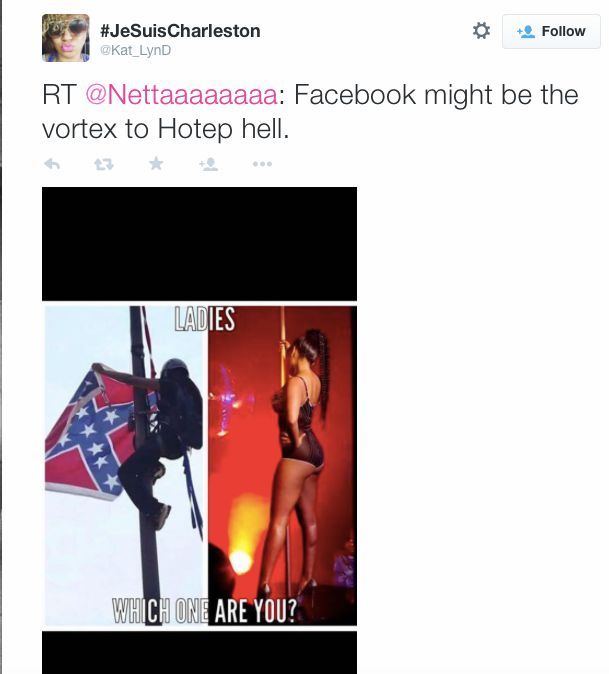 I don’t see racism and attacks on Blackness in every thing out there, just the things that I speak on in this nature. I see every Black person who’s trying to do great as a King or Queen (and those who are misguided, I feel they just need a push back onto the “right” path for them; God don’t make no junk, as 92Q DJ Konan used to say). Now, within the “Woke Twitter” and “Hotep Twitter” spheres, there are some great people in there, like any segment of life, and some weird ones. Personally, I’d rather just be SOTB! and talk on whatever I talk on.

Also, let it be known that I have enjoyed Ariana Grande tracks and her collaboration with The Weeknd was a great introduction of Weeknd to “non-urban” markets; I didn’t just “attack” Ms. Grande “because reasons and ‘wokeness.'” Hell, if my discussing this, calmly and mostly intellectually, is an attack, I would’ve hated to see these individuals during my “feud” with Andy Milonakis.

My God, I was, as the children say, a “savage.” While I didn’t really like Andy’s style or approach to, well, anything, I probably shouldn’t have thought he’d die from random diseases in the mid-2000s. My bad. I’m really sorry. I crossed a line that shouldn’t be crossed, as death is one of those things that shouldn’t really be joked about. There, I finally admitted I was an asshole during that time (and not really the type of asshole I am today, at that). Blame it on my youthfulness.

But, you’re not here to hear me apologize for youthful fuckery from which I’ve grown to be a pretty kick-ass adult. Ironically, it’s some of that youthful fuckery, from the outside being thrown back at me because karma, probably, that prompted me to this discussion.

A few days ago, I did a bit of a social experiment on Twitter involving Ariana Grande.

During the whirlwind of controversy surrounding Ariana Grande’s appearance on SNL, I made commentary about her parody (and yes, impersonations are a form of parody–one of the basic forms, at that; please do some research or something) of Rihanna and the song “Work” during the “Tidal” skit. Like clockwork, the trolls and superfans emerged. A mostly wild and profoundly loyal bunch, consisting of individuals between 15 and 30 (based on an assumption; not necessarily true), they proceeded to light up my mentions with bland threats, banal comebacks, and an overall misunderstanding of how the world works–musically and otherwise. I kind of admire their naivety but also wish they’d open their eyes and stop caping. But, I digress. I’ll get to that later.

Ultimately, after a day or so, I’d had enough mentions and discussions to begin dissecting them and possibly finding some sort of meaning within them. Through the “fuck you,” the “u stupid. Why u hate Ariana,” and the “you don’t no patois fuckbwoi” [sic] tweets, I began to see a trend. While non-Black individuals kept things short and sweet (usually a simple tweet along the lines of “u don’t know what u talkin bout”), Black (read: individuals who are descended from Africa; y’know, like Caribbeans, some Spanish-speaking individuals, “Black Americans,” and so on) commentators proceeded to challenge me the most. In addition, these children, teens, etc., proceeded to be blind to the pseudo-blackface performance from Grande, saying it’s no big deal while attempting to speak for all Blacks and “Islanders” (hopefully, that doesn’t sound to pejorative). That’s something you just can’t do, speak for everyone. But, that’s not why we’re here.

Blackness, or the concept of “Blackness,” is, within some groups and some topics, attacked just as much by people who look and, according to many Census statistics, are Black themselves. You could argue that it’s self-hatred. You may be right. Some non-American Black people look down on “Black Americans.” To paraphrase the controversial rapper NYOIL’s “Y’all Should All Get Lynched,” even Africans (and others) call Black Americans “niggers.” It feels as if it’s because of colonialism and the dissemination of information about the negatives surrounding “them niggers over there [in the U.S.].”

Hell, even within America and Black America, you’ve got people like Ben Carson, a brilliant mind and a legendary surgeon, calling our youth thugs and agreeing with those philosophies. When I was a kid growing up in Baltimore, in a situation similar to his upbringing, I looked up to Ben Carson. I said “hey, I don’t believe in idols. But, his output to humanity is something that’s great.” Twenty-some years later, I’m close(ish) to thirty and I can’t really say that I feel the same way about Carson, knowing some of his thoughts about the Black community at large. He’s still a great surgeon and a genius. However, I don’t want my kids to grow up like him. I don’t want them to grow up like “random gangbanger #40” either…but, yeah. Carson, for me, becomes less of a great role model because of his willingly blind look and blanket terms for the community I consider myself a part of.

However, this sort of thing, this “hatred,” if you will, of Blacks and Blackness hurts me. It hurts me two-fold. First, if you are descended from Africans, in any way, shape, or form, you are black. That doesn’t mean for you to disown your own culture. Nor does it mean that I’m trying to homogenize the Black experience. I’m just saying that those out there who look down on “Black Americans” are just as Black, when you break it down to a base level, as me (I identify as Black, regardless of my parents’ wonky lineage). To say “oh, fuck you, nigger. You don’t know anything about XYZ,” you’re on the same wavelength as those prejudiced and racist individuals who may’ve chastised you because of your skin color, your background, et cetera. You’re perpetuating foolishness and ignorance that doesn’t need to be perpetuated–especially within communities of similar individuals. If I don’t know something, teach me. Educate me on your definition of Blackness or whatever. I may not agree, but at least my brain will be that much better for knowing it.

Second, this sort of craziness hurts me because these are kids and young adults saying this shit. What does that mean for my kids? Hatred is a learned trait. Babies don’t come out the womb saying “fuck everyone who don’t look like me.” That sort of thing is taught by the environment in which these children are brought up in. If you’ve got this sort of foolishness going on en masse around the next generation, it’s bound to spread and continue on wreaking havoc on the Black community as a whole (society as a whole as well, but we’re talking the Black community at the moment). It scares the shit out of me and hurts me to think that my sons could, potentially, see that hatred from people who look like them and people who don’t look like them.

Let me tell you a story. My oldest, he goes to a preschool where he’s one of a few “Black Americans.” He’s friends with all sorts of people, but is a bit shy because some of the children don’t exactly look like him or his family. I tell him that a person’s heart and mind make them great, not their skin. But, I don’t know what those other kids’ parents are talking. I don’t want his friends, who come from a wide variety of ethnic backgrounds, to discriminate against him because he’s Black. We’ve got enough of that crap on “that” side of things from the racists and prejudiced individuals out there who aren’t brown. Be proud that your Blackness permeates through various people and multiple forms, from dark brown to lightskinned, from tall and caramel to short and milk chocolate. Be proud that your Blackness goes from random writer on the internet who used to rap to a Drake to a Kendrick Lamar to a Gil Scott-Heron to a Nelson Mandela. Revel in the amazing greatness it is to have that history.

I love my blackness. And yours pic.twitter.com/nHcskaDrS3

//platform.twitter.com/widgets.jsDon’t let racists and prejudiced assholes steal that from you. Please note that I did not say “white people.” To say that is biased and an assumption; assumptions make an ass out of of you and me to the point we get “shunned.” Ok, that was a stretch, but you get my point.

So, what I’m calling for is simple: unity and understanding. Now, bringing it back to Ariana, was I wrong for saying Ms. Grande’s performance as Rihanna was borderline blackface? Eh, perhaps I stepped over a line myself. However, it felt that way to me and I opened myself up to criticism because of it. That’s what I wanted, as I was open to hear a conversation with the group of fans who came to me with disdain. I wanted that conversation, needed it even. I wanted to help the youth–and the oldheads–understand that some shit just doesn’t fly, regardless of who’s doing it.

Would I call out a Black artist for saying some off-the-wall stuff that seems as an attack? Yeah. For instance, Chris Rock’s Asian jokes at The Oscars were out of pocket and out of line (just like the use of Stacey Dash, but…yeah). Do I feel that “Blackness” is being sniped at on a regular basis? At times, yes. Other times, I don’t see it as much as some people. Maybe I am “sleep” sometimes. Maybe it’s because I’m not out here, like some “activists,” blindly saying “Black Lives Matter” because it sounds catchy. I don’t know.

However, I do know it’s there, just like anyone’s “attack” on a person’s heritage. Do I feel that the celebration of “Blackness” is a spit in the face to “Whiteness?” No, not really. While I can see where people who say that sort of thing could come from, I feel that the unification and celebration of “Blackness” isn’t detrimental to White people. That is a thing that needs to happen: unification of all Blacks to achieve a common goal, which would be doing our part to bring on further greatness in our communities and the world at large.

All in all, I’m a humanist. I love humanity. I am proud to be Black. I’m proud to be an American (I’m not a bleeding-heart patriot or anything, but I do love and respect this country–along with any country). I just wish that we, as humans, can stop being so ass-backwards when it comes to “race,” ethnicity, and prejudices–on all sides. That sort of thinking limits our overall potential, dooming us to repeat the mistakes of our forefathers.

And to the Ariana Grande superfans who cursed my name, as much as I don’t understand blind caping, you guys are alright with me. Do you.

You’re wild and insanely passionate about her to the point I don’t understand it. But, you’re young and you’re allowed to be like that. Just, for the love of pie, please be receptive of other peoples’ opinions as you grow up. You don’t have to agree with anything I or anyone else says. But, at least try to put yourselves into someone else’s shoes and see what’s going on through their eyes, especially if they’re coming from a place of respect for their community and dignity. Open your ears and not your mouths.

That’s advice good enough for everyone.

With love to all of you in this wild-ass world we live in,