Skip to content
As I mentioned after XXXTentacion’s death, I didn’t know him. I thought he was “controversial,” and his music didn’t really speak to me as much as some of my younger readers and followers, but his death was tragic all the same. He was practically a kid who was trying to right some of his wrongs, just gunned down. That’s the part that shook me the most, since I’m a father myself. In the months since his death, I’ve started to notice something. Some people who listen to X have gravitated towards my own music.

At first, I thought it was just happenstance. Like, I’d dropped some new stuff, someone who liked X peeped it, and that was that. But, as time has gone on, I’ve started to get DMs and messages from people who have listened to X and like some of the stuff I put out. Perhaps, it was the mental health talkspace X and I both reside in. On top of that, Raquel made mention that “Lucid Dreams” sounded like something I could’ve written (that’s another story entirely).

Whatever the case was, I began wrestling with the idea of reviewing ?. I mean, on one hand, XXXTentacion was allegedly a not-so-great person. On the other, the kid was kind of brilliant with his genre-blending and seemingly invention of this whole new sound (by incorporating older sounds/energies). Ultimately, I gave into my curiosity and played the album from start to finish, having only originally heard (and liked) the track he did with Joey Bada$$. By reviewing ?, I’m not condoning X’s lifestyle (or alleged lifestyle). I’m approaching this as a music critic and a purveyor of music in all its forms. 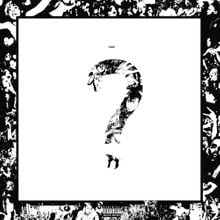 X begins the project by saying that ? is a literal kaleidoscope of music, a cacophony of many thoughts, styles, and the like, a mission “to say less but to say more.” However, there’s more to the story than just X dropping his favorite genres in a bucket and saying “here you go.” The album is a proclamation that he’s here for real, that he’s going to tap into his mental and pull out something positive while still talking about darkness, to give the audience a taste of what he calls his “insanity [and his] genius.”
He goes full Cobain on some tracks, such as on “ALONE, PART 3,” and truth be told? X has some pipes on him. I know I dismissed X’s singing, but he could actually hold a note or three and emote what was needed from the track. His sound is, for me, like a mix between a lot of The Weeknd, a little bit of Kurt Cobain with a touch of Jaden Smith in there for good measure, without completely aping either artist’s sound completely. It’s definitely unique and the production on the album allows X to capture that early young adult insecurity, those dealings with depression and mental health issues, and thoughts of regret and a desire for redemption just right.
With songs like “NUMB” and “Pain = BESTFRIEND” also dealing with these feelings, you’d think that the entirety of the project is dedicated to X cleansing his soul and becoming free of his demons. Another question raised on the album, to me, is whether or not X believes he is truly worthy of the redemption he seeks (and whether we, as listeners and observers of his life, are willing to give it to him). To be frank, given X’s turnaround before his death and his constant soul-searching? I’d say he’s worth at least a bit of the redemption he’s seeking and that shows throughout the album; as much pain is contained within it, there are still glimmers of hope and light. As polarizing as XXXTentacion is, with this album, he strips bare and tells us all to look at his soul. It’s not a pretty sight, but it’s one that allows us to begin to fully understand the craziness he’s gone through and put himself through. He doesn’t ask people to forget the proven or the alleged. Instead, he seems to own up to it and ask for forgiveness. That’s pretty mature, for an artist that died at 20 or otherwise.
But, it’s not all emo rap, as tracks like “infinity (888)” (the aforementioned Joey Bada$$ collaboration) showcase X being pretty adept with the bars as well. I found myself nodding my head to that collaboration more than I expected. To top it off, X definitely held his own with Joey on the track. We even get X delving into reggaeton with “I don’t even speak spanish lol,” which I’m sure could’ve been a fun video to watch, and fun get money and get sex vibes with “$$$.” There was literally something for everyone on this album, but that massive undertaking doesn’t dilute the quality of the music in the process.
XXXTentacion is a polarizing figure in music and rightfully so. He actually and allegedly did some messed-up things with regards to others. However, he also sought to help and teach others from his mistakes. All of that is on display in ? and as much as I probably shouldn’t like ? given who it came from (according to some), I found myself in awe about X’s maturity and ability to bare his life for listeners to indulge in and endure with him. I also found myself going along with his tracks more than I thought I would initially. His influences run the gamut and they’re all on display in ?.

Like the artist, ? is somewhat of a polarizing album. Even with that polarizing factor, it’s a damn good listen, given that it could’ve gone left into incredibly self-indulgent material really quickly. No one walking the surface of the Earth is exempt from messing up, whether big or small. However, it’s what we do from those mess-ups and flaws that can make us a better person. X doesn’t get that chance in full, as he was gunned down before 21. Nevertheless, ? was a valid attempt to try to walk a better path, acknowledge demons, and give fans and new listeners alike an open window into what it meant to be XXXTentacion as an artist and as the man behind the aura.

Does his music’s range, his obsession with death, and his early actual death mean he’s the new Tupac? No, not at all. It does mean that he’s the only XXXTentacion, which seems more in-line with what X wanted out of his career and life.