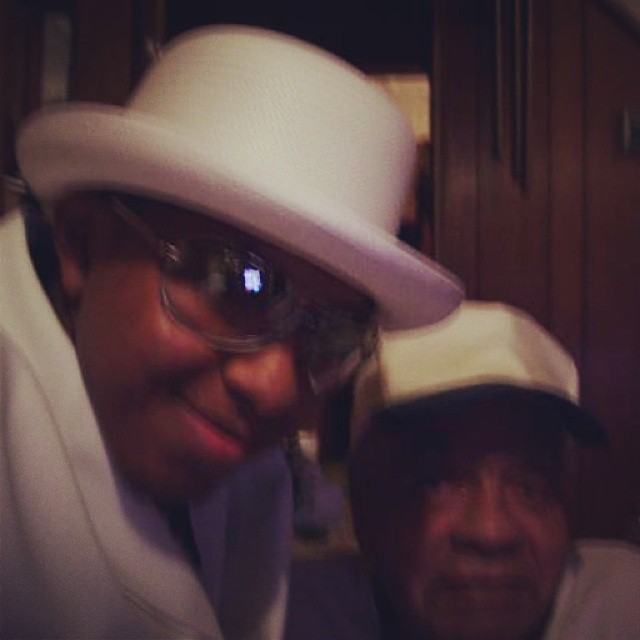 A couple years ago, I wrote a piece on “Let Nas Down” and the absent father. The piece mentioned my resentments towards my father. But, as with some aspects of the Speed on the Beat backstory, I usually keep quiet about my father and my feelings towards him. Because of this, I’ve never actually went into much detail about my own father. So, here goes: as much as I love him, I also feel as if I hate him at times, God rest his soul.

But, above all, I hated how he wasn’t there. Now, don’t get me wrong: my father was around and physically present in my life. That, however, was, most of the time, the extent of his involvement with me. Thinking that money could buy happiness, he made sure that I, for most of the time he was alive, save a year or two (that time has been discussed in music), made sure I never wanted for anything. I had clothes–even if they were something I would’ve worn sixty years ago versus in 1995. I didn’t care about that stuff or the random toys or trips to Horn & Horn Smorgasbord. I just wanted him to be present in my life and actually act like he gave a fuck about me. I don’t know if it were the age gap, the fact that he’d tried to be a father twice already and those children, my half-brothers, also had animosity towards him and their perceptions of him (that he gave me and my mother tens of thousands of dollars), or what, but there was never as great of a connect as there should’ve been.

When my father passed, I shed minimal tears. Again, it wasn’t that I hated everything about him. It’s just that over the years, his indifference/love shown through finances over actual love turned me a bit colder against him. I never really knew much about him, even though we were close.

So, when I found out that I was going to be a father two years after his death, I was ecstatic. “Finally,” I thought. “Finally, I can atone for his sins and be a better man than he ever was.” Looking back, however, I got caught up in besting him. And because of this, I ended up falling into similar tropes and repeating some of his mistakes. I was so hung up and stressed out about being involved in every little thing that Jovanni did, I missed a lot of the simple things. Ultimately, I, like my father, sought “attention” from outside my relationship with Raquel. And even though I, unlike my father, attempted to right things and be there for my children outside of just cash, I fell for some of the same pratfalls.

I was at my wit’s end, and practically suicidal about my perceived failures as a father. I felt that no one understood what I was going through. And my father, the person who I failed to not be like in certain aspects, he was dead. I couldn’t ask him how he handled it. As selfish as it is, that just gave me another reason to hate him: our lack of a bond due to the age gap between us, as mentioned. Out of options, I searched for advice from the one person who I’d never done so with before: my stepfather.

Now, my stepfather, I identified with in some ways more than my father, even if we never had long heart-to-heart conversations. However, he was able to, with my mother, give me advice that actually meant a damn. It wasn’t just that schlock-y “if you love something, it’ll be” foolishness. It was that tough love, that love that my father tried to give me–but usually failed because he was too busy trying to beat me with a cane. And, while things aren’t perfect between me and my son, the advice my stepfather and others gave me, it’s helped me become a better person and a better man.

“Don’t take yourself too seriously,” he started one weekend, during an Orioles game. It was the same bit of wisdom Raquel always shared with me when I started to have an episode due to a load of stress. “If you stress out about everything, you won’t have any energy for the little things. So, JoJo wants to run around the house with his toys. So what? As long as he isn’t hurting anyone or himself, let him–to a point. And, you’ve always got to hug him. I know you love him, but show it.”

As the years pass, even if Raquel and I never get involved romantically again, I want to be sure of two things. First, I want my children taken care of financially. But, I also want them to be taken care of emotionally and mentally. No child should have to grow up hating their father, even if, as an adult, you kind of “get it.” I’m not the best father, but I strive to be the best father I can be. So, here comes another question: if Raquel starts dating someone else and that other person teaches my kids something “without my permission,” would I be mad?

Disappointed, perhaps. But not “mad.” Why? Even the best fathers don’t know everything and they learn to, even in big situations, to not act as if every little thing is the end of the world. So, fathers of the world, love your kids and actually show it in ways not centered around money. Be there for your kids as long and as often as you humanly can. And, even if it’s in vain, try your damnedest to make it so your kid never has to utter the words “I hate you” and mean them for something bigger than “oh, you won’t let me go to XYZ.” Because, even if your children eventually get the reasons behind your actions, as selfish as they may be at times, it still doesn’t help your child if they hate you.

So, in closing, I want to revisit the statement I made in the beginning of this op-ed: “I hate my father at times.” It still stands true as I wish that he would’ve tried harder to have a bond with me instead of him just giving me money and whatnot. But without him, I wouldn’t be the man I am today. Without his lack of engagement, I wouldn’t have had my stepfather to talk to. But, inversely, without my father, I wouldn’t have learned a lot about myself and what not to do in life–including the whole issue of taking myself too seriously. So, while–at times–I hate you, Dad, I still love you, partly because it’s impossible to fully hate the person who made you.

Make sure mom’s doing alright, since she always used to check up on you.

-Speed on the Beat