Skip to content
Today, I got the chance to conduct a patented SOTB!!! Q&A with an artist out of Virginia. #DMVBusiness, #DARBusiness, and all of those awesome bits for sure. But, pleasantries aside, college student by day artist Omeo was gracious enough to answer some questions about his music, his plans, racial tension, his beginnings, and the Snapchat…err…love he receives from the ladies. So, without further ado.

Speed: For those without the benefit of flash photography, who are you and what’s the story of your performing name?

Omeo: It all started when I was around 14 years old. I had always showed in interest in music and it was at this point where I felt I should give myself stage name. I was in the car with my older cousin and I told him that I was trying to think of a name for myself. I told my cousin that I was thinking about the name “Omo” and then he laughed said that sounded like “homo.” Then I realized I it wouldn’t be the best stage name for the image I was trying to pursue (laughs). My cousin then thought of the name Omeo, he said it sounded like Romeo, you know the ultimate ladies man. I figured this name fits me better (laughs).
Speed: How would you describe yourself, musically and otherwise, in three words?
Omeo: Always. Dreaming. Big.
Speed: Who are some of your influences?
Omeo: When it comes to music I believe that every single artist that is famous or at least has a good set of fans is doing something right. Therefore, every musician that I listen to or have heard of inspires me. Some of the artists who inspire me the most are Drake, Logic, Kanye West, Kid Cudi, Kendrick Lamar, Schoolboy Q, Ab Soul, Mac Miller, Earl Sweatshirt, J. Cole, Childish Gamibno, PARTYNEXTDOOR, Eminem, Kid Ink, Lupe Fiasco, Skizzy Mars, Asher Roth, Nas and G-Eazy. The list goes on and on. I tend to pick up little things from every artist and from that I learn how to make my sound better and more universal while also staying true to my own sound. My family is also a really big inspiration; anyone that wants to see me do well in life and succeed inspires me, to be honest (including my fans).
Speed: What started you on the path to making music, producing and recording?
Omeo: It all started in 2009 when Iran was going through the green movement which was an uprising against its Islamic state. I randomly thought of making a rap about everything going on in Iran. I wanted raise awareness about the unfair treatment of the people in Iran by its government and also talk about what was currently happening in the uprising. This song sparked my interest in rap and ever since then it has been something I really enjoy doing.
Speed: Last full-on music question: where do you see yourself in three years?
Omeo: In three years I see myself having a good fan base in all the states across the US and slowly branching out overseas. I also see myself on tour. 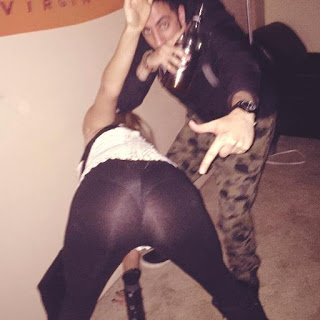 Speed: So, what’s the deal with the avi (left)? (Laughs) Told you I was going to ask.
Omeo: Yeah. So this hoe was on my dick at some random party.
Speed: Definitely remember those days.
Omeo: …and I just wanted a regular picture with her. But, all of a sudden, she bent down and did some slutty shit.
Speed: On that note, if you weren’t doing music, would you be a DJ Zeeti type, getting women to post the cheeks just off the strength of…well, I’m not sure why/how Zeeti has managed it? I mean, you’re out here getting the women pretty worked up off your music (laughs).
Omeo: If I weren’t doing music I would still be doing the same thing. I’m currently a pre-med student a Virginia Tech so I guess I’d be even more focused on that.
Speed: Must be crazy. How’s student life at VT versus say, a UVA or a UMD? I never got the chance to make it down to VT during my undergrad but I’ve heard it’s legit.
Omeo: I’ve only been to UVA once and that was for midsummers, which is like basically a weekend in the middle of summer where everyone goes back to turn up. If I would compare the two schools party wise I would say they both turn up hard as fuck. I got love for my school but honestly the guy/girl ratio at UVA is better, nothing beats our food though.
Speed: Where are some of the best spots for college students around you, as far as you know/are willing to divulge, to let loose and turn up?
Omeo: There are many bars in Blacksburg, but one of my favorites is TOTS which stands for the “Top of the Stairs.” They have a nice outdoor balcony where everyone could drink and turn up. Other than that the house parties are pretty nice.
Speed: Do you deal with any side eyes from people when you tell them, “hey, I’m a Middle Eastern artist?”
Omeo: When I first introduce myself as a rapper to someone I feel like they don’t take me as seriously or don’t think I’m as good as I am just because of my appearance. I don’t really look like the typical rapper. As soon as I spit something for them, all their doubts get thrown under the rug.

//platform.twitter.com/widgets.js Speed: I’m including one of your freeverses in this by the way (see above) Speaking of that, does it bother you when people attempt to define you by your ethnicity versus your talents?

Omeo: At the end of the day there will always be people they judge you based on how you look, as long as I have confidence in myself and I know I can spit fire then nothing else matters.
Speed: Did your family have any sort of pushback against you pursuing a rap career of some sort?
Omeo: At this point in my life I feel like my parents are pretty frustrated but proud at the same time. They’re paying a bunch of money for me to go to school and pursue my dreams of being a doctor. But, also, at the same time my music really picked up. Of course they support me and whatever I choose to do. But, as of now? My future career is not set in stone yet.
Speed: What are your opinions on incidents such as what happened in Charleston? You can be honest if you don’t necessarily find it to be “terrorism.” Although, if that’s the case, I’d love to hear why you feel that way.
Omeo: I would definitely define it as terrorism. Any act of violence intended to create fear in a group of people is defined as terrorism. I feel like most of the time the media only uses the word “terrorist” when the suspects are of Middle Eastern descent. But, in reality a terrorist could be anyone.
Speed: Truth. What are your thoughts on the uptick in movements against the Confederate Flag?
Omeo: I’m glad there are movements against the Confederate flag that are being noticed. Although everyone has freedom of speech, religion, etc. I don’t support the flag because the Confederacy doesn’t exist anymore. I feel like the flag implies that one does not see America as a whole but as its segregated counterpart before the Civil War.
Speed: What about movements for the improvement of minorities in America?
Omeo: Although we will never reach a complete state of equality for everyone living in the United States, in recent times we have definitely brought to concern the acts of discrimination and prejudice against minorities and that is just one step forward in improving life for minorities in America.
Speed: Where can people reach you for new music, beats, etc.? Because it looks like, with teaser remixes to, for instance, “The Hills,” you’ve got people fiending.
Omeo: I now post all my new music on my Soundcloud. You can expect to see my debut EP, After Hours, posted up for free download on my Soundcloud and DatPiff at the end of summer.
Speed: Finally, do you have any final thoughts you’d like to share with the readers and/or your fanbase?
Omeo: I want to thank everyone that has believed in me and has continued to support me and my music. I love my fans so much; yall’s love and support really means a lot to me. Thank you again.