I was born in 1988. What that means is that I was born and grew up in a perfect storm, so to speak, of families on television. This is especially true for Black families. From the Huxtables to the Williams (Wayans), from the Winslows to the Campbell/Landry household, I’d like to believe that, even in the incredible hokey moments that encompassed ’80s and ’90s sitcoms, I was influenced in a good way by the togetherness displayed by these families.

But, let’s be honest with ourselves. The Huxtables were corny as hell. And no, this isn’t a discussion on their “whiteness” or “whitewashing” of reality, because that’s too easy (Fresh Prince wins because it talked about racism as a real thing versus something we fought over and won after MLK was killed). What I want to do is a comparison: look at the Huxtable Family while comparing them to one of the other classic television families of this era, the Banks Family of The Fresh Prince of Bel-Air, to see which family really wins out as the quintessential “black sitcom family of the 80s/90s,” since both of these shows are also classics. 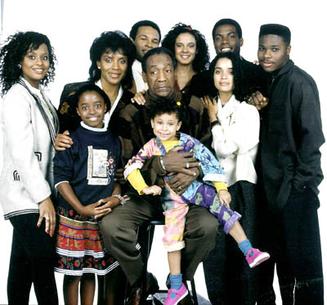 Now, let’s start with the patriarchs of the respective families, Cliff Huxtable and Philip Banks.

While Cliff Huxtable, played by Bill Cosby, loved his children and his family, he often showed this through jokes, gags, and things that weren’t all that practical. Additionally, Cliff was kind of mean-spirited towards people he deemed lower than his social standard. For instance, let’s look at Cockroach, Theo’s “dumb friend,” played by Carl Anthony Payne (every 80s/90s sitcom had to have one, usually assigned to the middle child). Cliff often seemed to wonder whether or not Theo’s friends were just ne’er-do-wells, fun to goof on, or just plain stupid. Cliff’s job was pretty top-notch in the sense that he was a doctor. But, unlike our next dad, we began to forget he did work outside being, well, Bill Cosby.

Philip Banks, played by the late James Avery, never forgot where he came from and often showed concern for his old stomping grounds in a way that wasn’t pandering. Furthermore, he took in Will Smith and helped develop him into an upstanding young man. This was in addition to helping Will’s “dumb friend” Jazz keep his head on straight–even after the many failed attempts by Jazz to get at Hilary. Also, Banks’ job was still showcased as a thing. Said thing almost broke up his marriage to Vivian (II), but they were able to talk things out, reconcile, and set up for the final episodes.

Point goes to The Banks Family. Philip was a better dad and a better worker. Additionally, he seemed more realistic, even having disagreements with his wife over what was really best for them financially (even though they were pretty well-off). Next up, let’s get into the mothers.

With regards to the mothers, I’ve got to give it to Phylicia Rashad’s Clair of The Cosby Show. This is the easiest decision of While Vivian I, played by the amazing Janet Hubert, was smart, classy, beautiful, intelligent and more, Vivian II was kind of just a pretty face who looked more like Karyn Parsons. Oh, and to set up the cliched “you look different now” joke to which Will Smith gave a legit “whoops, sorry guys. I kind of effed up” look to the camera.

No, seriously. Vivian I was able to go toe-to-toe with everyone presented to her, plus, she was more of a realistic parent to her kids. For the most part, all Vivian II seemed to do was say “Philip…,” give a sassy black woman look, and saunter off for the rest of the episode. I remember more about Vivian I as a character than I do about Vivian II. I really wish that Will Smith and Janet Hubert could’ve gotten along better. C’est la vie, I guess. But, because of the “Two Vivians” rule, I’ve got to go with the one Clair. When it comes to oldest children, I’ve got to go with Karyn Parson’s Hilary and here’s why. Sondra Huxtable-Tibideaux, played by Sabrina La Beauf, pretty much always had it together. She had her moments of “huh,” but she came to her senses pretty quickly and usually without much conflict.

Hilary, however, kind of went through the struggle. She went from airhead Valley Girl who was always the butt of a joke to a successful talk show host. By the end of the series, “The Hilary Show” was to be syndicated nationwide from New York. She had began to make a name for herself aside from her family’s name. Sondra, while she was a lawyer like her mother, became, as the series went on, more scatterbrained and didn’t have as many glowing accomplishments. Yes, she gave birth to twins and that’s something that’s great in its own right, but she also gave birth to the Elvin character played by Geoffrey Owens. I’m sorry, but Elvin was more annoying than anything. He had good intentions, but he was a dork through-and-through. Even Carlton had moments of “cool.” With that in mind, let’s go to the second-oldest offspring.

Second kid-wise, I’m going with, shockingly enough, Lisa Bonet as Denise Huxtable-Kendall. While the legendary Carlton Dance almost won it for me, just off the strength that the Carlton Dance is what it is, Denise–wait a gotdang minute! While Will Smith wasn’t actually a Banks, he was, technically, the second child of the Banks Family (he’s about a year older than Carlton, give or take). Plus, you can’t, like, not include the namesake of the show.

So, knowing this? Sorry, Denise. I’m going with my man Will Smith for the win, definitively.

Will grew by leaps and bounds when compared to Denise. Plus, because of Denise, we got Olivia. And because of Olivia, we got Raven-Symone. But, more on that later. But, it seems to be a trend that, while The Cosby Show showed its characters getting married and whatnot, their spouses and kids were kind of grating.

Now, for the “third kid,” I’m going with Alfonso Ribeiro as Carlton Banks for the win over Malcolm-Jamal Warner’s Theo.

Now, Theo’s glo up was real. He went from “you big dummy” territory to an NYU graduate. That’s clutch. But, Carlton learned to not live in his father’s shadow, learned some real-life skills along the way he didn’t have as just “Carlton Banks: Philip’s Son,” and ended up getting into Princeton towards the last few episodes of the series. Princeton versus NYU, Carlton Dance versus Theo’s Crappy Sweater…yep, I’ve got to put on some Tom Jones. Even though MJW had a pretty cool turn on Sons of Anarchy and Ribeiro hosts America’s Funniest Videos now, I’m still going with the cardigan-wearing, arm-swinging, squealing little man from Bel-Air.

Four is lucky for the Huxtables, as I’m going with Tempestt Bledsoe’s Vanessa over Tatyana Ali’s Ashley in our match-up of fourth kids. When Ashley seemed to become more like “Aaliyah: The NBC Version” (remember the “Make Up Your Mind” song and episode?) and became more of a vehicle for Ali, Vanessa felt more like a person. Ashley, as she grew, was given storylines (the virginity episode, the bikini-clad cola ad episode, etc.), but some kind of missed more than they hit, which made me remember more that I was watching Tatyana Ali play Ashley versus being immersed into the character. That’s not to say that Ali was less talented than Bledsoe; they’re both incredibly talented. But, Vanessa rang more true to me. Now, let’s focus on the babies of the family.

Nicky versus Rudy isn’t even fair. Why? Well, it’s a five-year-old going up against a teenager (by the end of the series). However, it’s not like I can compare Jazz or Geoffrey to Rudy. With that said Keisha Knight Pulliam’s Rudy Huxtable wins over Ross Bagley’s Nicky. Also, there was that entire Boyz II Men Christmas episode that randomly sped up Nicky’s age because, you know, cute, snarky, precocious kids FTW! If we were going Nicky versus Olivia, Nicky’d win. The “Dougie” episode trumped most of Olivia’s qualms (except for the episode where her dad was leaving).

So, I guess that means I’ve got to compare Geoffrey to Olivia, as both were secondary characters that were, in some way or another, connected to their respective families. This was done in a way that they might as well, if they weren’t already, have been part of the family. I’m not going to talk about Pam (even though Erika Alexander was freakin’ awesome as Pam and as Maxine) because Olivia appears in more episodes. We’ve got snarky butler versus snarky kid who grows up to hate names such as “Watermelondrea.” Olivia was pretty much given the de facto task of keeping folks interested in The Cosby Show. Geoffrey was always the sarcastic, but lovable, butler that people went to for that taste of British Realness. Olivia, in some ways, succeeded in keeping people intrigued by the Huxtables…but not in a good way. You could almost set a watch to when Raven-Symone would deliver an Olsen Twin-esque quip in an episode. Geoffrey’s sarcasm and snark was more evenly spaced out. Because of this, I’m going with my man G over the girl who grew up to see the future, be a part of the future–oh, and ruin Hangin’ with Mr. Cooper. I’m kidding, Raven.
But, no, seriously…Raven-Symone, you’re not that funny or witty.

One thought on “Family Feud: The Cosby Show versus The Fresh Prince”