A few weeks ago, I offered up some of my picks for quality diverse television comedy. To “qualify” for the non-exhaustive list, the show would have to, quite simply, not just revolve around a bunch of cis White men. Not that there’s anything wrong with cis White men, mind you. But, there’s so much more out there to explore to truly have a diverse watching experience. After the piece dropped, I got requests for my picks for dramas on television that follow the same parameters. As with the comedy piece, this is not a definitive list. There are more out there, but I’m just giving you a taste.

In recent years, through the wonders of shows such as True Blood, Empire, and pretty much every Shonda Rhimes series, we’ve gotten a pretty nice war chest of diversity in the drama field. Let us start with the Shondaland series. While Grey’s Anatomy has been on a rollercoaster in terms of quality over the past few seasons, when it hits, it still hits hard. For instance, I want to discuss the recent storyline(s) between Jesse Williams’ Jackson Avery and Sarah Drew’s April Kepner.

As viewers, we’ve gotten to see this couple evolve from work friends, get hitched on a whim (because love wins…sometimes, you know), and ultimately see their relationship deteriorate because of differing opinions on work and differing ways each partner dealt with the loss of their child. How the relationship’s played out, thus far, is a bit different from standard Grey’s breakups. Divorce, discussions on abortion, unplanned pregnancies between distant couples, religious affiliations, and the fact that they’re an interracial couple have all brought into play over the years (the IR aspect not as much because, well, it’s Shondaland).

It could’ve easily veered off into head shaking and finger wagging territory. But, Rhimes’ team of writers have been able to flesh out this duo. And they’ve done so to the point where I’m personally invested in their happenings (and I haven’t been a diehard Grey’s fan for a couple years now).

Scandal, while it’s gotten kind of ridiculous, it still gets some high marks for showcasing women and people of color in powerful positions (and not just making it about race or gender) and its storytelling.

The series features its fair share of, and I hope I’m not sounding overly misogynistic, “pussy power.” But, it’s less about the sex than it is about the betterment of Olivia Pope’s team, their contractees and, in some instances, the entire free world. Again, I know the show’s gone off the rails with its 24: Kerry Washington Edition-styled espionage subplots. But, the series, like Grey’s, tends to still get it right more than they get it unabashedly wrong. On top of that, it’s still managed to keep itself true to its fans while still evolving, something that many dramas tend to fail at. The midseason finale “Baby, It’s Cold Outside” is a prime example of this. If you’ve not seen it, check it out. It both presents several sides to an argument while still leaving the end decisions up to Olivia. Plus, Katie Lowes is bae. I’m one of the those folks who loves Quinn, so I had to throw that random shoutout out there.

Now, let’s talk How To Get Away With Murder. It’s possibly one of the best shows on broadcast television, bar none. It’s what happens when you give Viola Davis damn near free reign on her character and give the series the Shondaland stamp of approval without having Rhimes completely delve into the show herself. As I reign back my fanaticism for the series, at its core, HTGAWM is a fantasy whodunit where the “whos” and “whys” answer as many questions as they bring up while still making sense, both in the world of the series and its real world counterpart.

As the series has progressed, each character has grown, gotten dirtier when compared to their squeaky-clean premise during most of the pilot. We’ve gotten to see what the implications of working with Davis’ Annalise Keating are (they include, but are not limited to, death, more death, a need to circumvent the law in ways previously not thought of to CYA, and losing people you care about either because of death or a fear that they’re becoming more of a monster than even you can handle).

The stakes keep getting raised and the Keating Six(?) don’t always win, at least not outright. They make mistakes, and sometimes, like real people, don’t always learn from them. It’s that “even when they’re kicking ass, there’s still a chance everything will go to Hell” factor that keeps me entertained and interested in these characters. They feel real and are given realistic situations to deal through, situations which don’t always have nice endings, and scenarios where, even when they “win,” it’s still a lose-lose.

Speaking of apparent Kobayashi Marus, let’s take a look at the Gossip Girl-meets-early 24-esque (or “Grey’s meets Homeland“) series Quantico. You knew it was coming the second I say “diversity in drama.” It packs the thrills of watching Jack Bauer mow down terrorist plots and adds in workplace drama. So, on top of a flash forward/backward about bombs blowing up in NYC, you also get lots of sexual tension, bureaucracy and more.

Additionally, we get Muslim characters who aren’t terrorists or just defined by their religion, headstrong White guys who aren’t just about being the alpha male, tender moments, subplots out the wazoo, and a wide array of shapes, sizes, genders, orientations, and colors. I just hope that the writers don’t jump the shark with these last few episodes. I’ve seen great shows go completely off the rails from a bad stretch and/or too many Deus Ex Machina popping up (hi Revolution. May you RIP).

The CW has a pretty solid dramedy under their wing as well. I’m talking about Crazy Ex-Girlfriend. I think the best way to describe it is like this: imagine Rachel Berry from Glee having a fever dream in which she was, at times, less self-aware of her tendencies. And, truth be told, that’s still a crap way to describe it. Don’t let the “oh, it’s on The CW” thing keep you from checking this one out.

I won’t get too much into Gotham. It’s a dope origin story for the Batman Universe. Its use of diverse roles keeps me interested (on top of, y’know, it’s about pre-Batman Gotham). However, it’s hindered, in some ways, by its inability to fully incorporate other DCU characters because of licensing rights. Kind of like Deadpool, but less funny and more Dark Knight-like “gritty.”  I also won’t spend a boatload of time on Empire (so many critics have already).

Nevertheless, it’s a good show that, when the Empire team focus on the family and less on every Frank, Camille, and Mimi who pops up, gives us some stellar family drama (even if we sometimes see something like Jamal rap battle by sangin’ his bars to his opponent). When it loses focus, it’s still fun to watch. But, it starts to feel more like a soap opera than it’s (probably) supposed to. Go watch it, if only for the soundtrack. It, even with kind of weak songs like “Boom Boom Boom Boom” and “Drip Drop,” is pretty top-notch.

All I’ll say about Underground is this. Stop sleeping on it. If you haven’t seen it, go and binge watch. F’reals.

Now I haven’t seen much of Blindspot, but what I have seen, I like.

It’s a lot more than “Jason Bourne in a skirt,” as I’ve seen some people describe it. I probably owe it to myself to check it out more than I have (so many shows, so little time). I recommend because, again, what I’ve seen has been pretty well-written and it features a pretty diverse cast. It’s still rough around the edges at times and I fear that, like Quantico, they may try to do too much, too soon and end up killing what works. But, then again, The Blacklist has lasted for three seasons and I had the same fears about it when it first began (same with Scandal being on season five).

The Walking Dead still gets a nod as, well, it’s a show about a buttload of people from all walks of life getting together to, you know, not die. Men, women, Black, Asian, White. They’re all trying to not die. 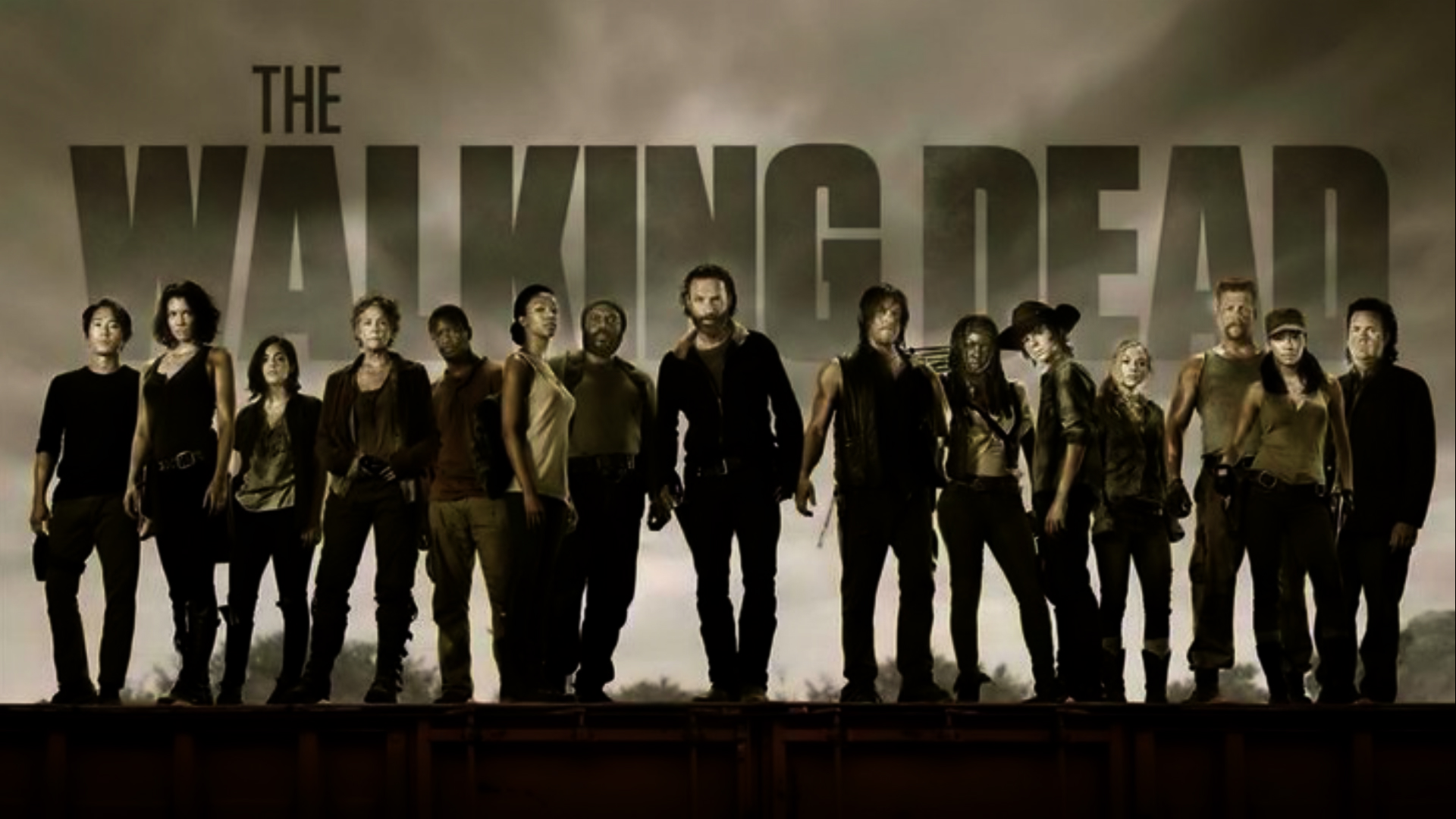 Can’t get any more diverse and/or unified than that. Do I feel that the later seasons have fallen off in some ways? Eh…kinda. But, I caught up on the show the same way I did Breaking Bad and Broad City: binging the everlasting crap out of it on the random. So, earlier seasons are probably fresher in my head than they are to others (I’m admitting bias here to some of the moments in the earlier seasons over now). Plus, we get to see Norman Reedus as Daryl. As a Boondocks Saints fan, anytime we get to see one (or both) of the McManus Brothers kicking ass and being awesome, I’m all-in.

On premium cable, we get shows like Power. Power is not Empire, and vice versa. They’re both two solid shows, but there are many differences between them. If you accept that and don’t go in saying “oh, I’m getting R-Rated Empire,” you’ll get treated to a damn good show because it’s so much more than an “R-Rated Empire,” just like Empire is so much more than “a toned-down Power.” Stop the fanboy clashes, guys.

Additionally, I want to talk a bit about Game of Thrones. Why? It’s an ensemble cast of strong women and men who aren’t all your typical fantasy drama stereotypes (read: not everyone is blond and White and “virtuous” and even those characters who are aren’t always your typical heroes) and, like Scandal, a lot of the power truly rests in the women of the cast. I just wish they’d get some better fight choreographers as some scenes take you out of the action and remind you “hey, you’re watching a TV show, by the way.”

Is it as “diverse” in some ways as some of the other series listed? Eh…not completely. But, if you want some social commentary, the show’s regional tension (for instance, how people look at the wildlings) is a pretty solid proxy for modern day race relations. Plus, there’s some solid commentary on religion, fanaticism, and more wrapped up in the dragons, treachery, and magical craziness. On top of that, the show’s just friggin’ balls-out amazing. If you haven’t given in to the GoT bandwagon, hop on. You’ll thank me later.

Again, this isn’t an exhaustive list. If it were, I’d have you here for about an hour and you’d get tired of reading my ravings. So, let’s just leave these here and go binge like there’s no tomorrow.