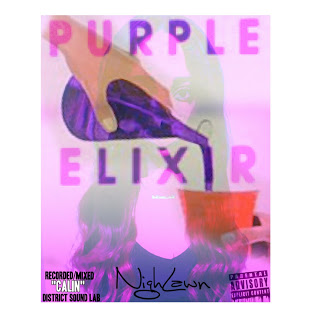 NighLawn starts Purple Elixir off with “Compulsive,” a syrupy ditty focusing on someone who she’s questioning their intentions and potentially being a compulsive liar. Laid over an instrumental that provides NighLawn with the instrument needed to vocalize her emotions and frustration on this situation, “Compulsive” is the summary of the project in some ways. It’s an emotional project that takes us on a ride through some of NighLawn’s darkest and brightest times, coaxing us to pop another one to get to that level we need to be at in order to just say “fuck it all” and let our emotions pour out.

The mix work, done by District Sound Lab’s Calin, definitely helps give the project more smoke and more emotion than it could’ve had. Add that in with NighLawn’s ability to switch it up from dropping bars to singing out the pain, and you’ve got a pretty dope project overall. While the entire collection isn’t full-out lit-addled emotions, it’s at its strongest when it is. For instance, the track “Whip Cream” deals with a lover who’s lying to their folks and denying the fact that they’re whipped by NighLawn’s loving. Her half-cry delivery, mixed with the “Child’s Play”-like lyrical content, and the Flyvon production, it all comes together and gives us a confident but vulnerable young woman who is giving us her soul while pouring up. It’s a wondrous thing, really.