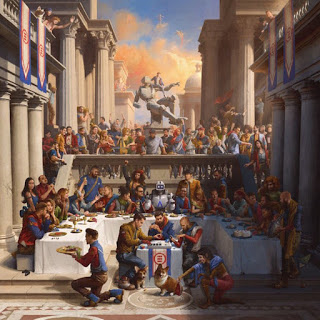 Today’s look at Logic’s newest album won’t be like my typical multi-listen same day reviews. Instead, I’m going to give you my thoughts on my first few listens. I’m at home with my youngest Speed today so I haven’t had the time to go as in-depth as I’ve wanted to. Therefore, there may be another look at this album coming soon, possibly in a PA piece with Drizzle Sez. Nevertheless, let’s get into Everybody.

The album, for me, feels like Logic’s GKMC. Both albums are the culmination of a story that’s been in the makings and has been told since both Logic and Kendrick both fully burst into the scene. But, to just say that and leave it at just that, we’re doing a great disservice to the body of work Logic has put out on this project. Also, to say it’s just his further discussion on being a mixed-raced rapper who “looks more white than black” is something that’s a slightly jaded look at the project.

The project takes the story of TITS, turns it up to about 100, and doesn’t let its foot off your neck for the duration of the project. There’s also several subplots which I won’t spoil for you. He takes the above things (influences from Kendrick [and Cole], being biracial in 2010s America, being a young man in a crazy world, etc) and properly ups the ante in making his experiences synonymous with the plights of everybody (title drop intended). Through guest spots ranging from Killer Mike and Juicy J to Alesia Cara and Neil deGrasse Tyson (and a few surprise guests), Logic tells his story in a cinematic way and allows for listeners to place themselves in his shoes and recognize their own pain.

Lyrically, it’s his best work, bar none. Topically, he’s on point. Bar-wise, he’s at the top of his game on this one. Sonically, the brother is singing and rapping better than a lot of your favorite sing-rappers. And it all works here to create a template through which we can all try to just do better, regardless of whether they’re Black, White, biracial, straight, gay or what have you. It starts with everybody saying “hey, this world we’re living in is kind of fucked up. Let’s change it for the better, even if we’ve got to suffer some strife along the way.”

Is the album nothing but “kumbayah moments” and “come to Jesus moments?” No, not at all. Remove the storyline (if you can, since a lot of the songs hinge on it, for better or worse) and you’re still left with a great album from a dope lyricist that is still his best work, and that’s even going back to his “performing at Thirsty Turtle on Route One” days. However, it’s the story and the evolution of this man as an artist and as a man that allows this to be yet another dope project that’s been released thus far in 2017. Is it better than DAMN.? We shall see in the long run. However, it doesn’t NEED to be better than DAMN., though. And that’s the glory in it. Through having Kendrick and Cole influences, Logic created an album that’s all his.

In short, everybody needs everybody and everybody should check out Everybody.

Damn, that was a mouthful to type on a phone while watching a toddler. Appreciate this review like you should appreciate this album. And with that joke, I’m out.