Skip to content
Let’s get our SOTBSports rant on!

Now, I’ll never get out here and make a bunch of hot takes, like so many other “Basketball Twitter”/”Sports Twitter” folks. I don’t really mess with that sort of thing. However, I’m going to say this: I don’t think that, even with Kyrie Irving wanting to be the number-one guy on his team (maybe), he’s fully pissed off and wanting to get the hell out of Cleveland on the next train smoking. I don’t think it’s all about his “I wanna be number one” mentality. I think that his trade request makes sense, because it forces Cleveland’s hand in a lot of ways, ultimately to benefit everyone.

Will the Cavs decide to trade Irving and receive a bunch of players in return? Will Cleveland say “we can stare you down, too” and trade icy stares and foolishness while the team implodes upon itself? Or will the Cavaliers, with their desire to be the best team possible, trade away someone to gain someone else to keep Irving halfway happy? Considering how Cleveland’s falling apart at their core (a new GM, for starters), I do see the Cavs moving Irving and further pissing off LeBron James and forcing his hand upon his re-entry into the free agent market.

But, where does Irving end up? 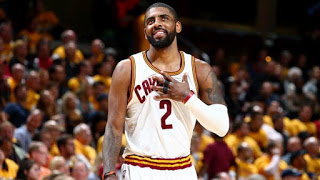 That, I’m not sure of. He could end up in New York, possibly in a trade for Carmelo Anthony or someone of that stature. That’s a win-win for everyone. Kyrie gets to play in a top market, he possibly gets to make the Knicks back into a top team, and Carmelo may finally get a ring with Cleveland. Irving could also end up in San Antonio, possibly in a trade for Kawhi Leonard, which would yield the same results. Hell, he could even end up in Golden State and have the Warriors win everything, forever Milwaukee, who kind of needs a PG of Irving’s caliber to kick ass and take names.

Ultimately, unless Irving stays in Cleveland, the results will be the same. He’ll gain a chance to become the Number One Stunna again (remember: he was the top guy while LeBron was in Miami foor a few years and made his own mark with the region) and the guy he gets traded for gets a large boost in his championship probabilities. If he stays with Cleveland, which seems more and more like a long-shot, he’ll probably accept his role