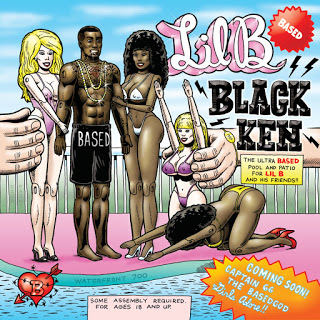 This is not a drill, y’all. Lil B has finally released the much-hyped Black Ken project. Now, does it hold up to the hype people placed on it over the past several years? That’s where I come in. I’ll be straight with you: this is a three-listen review. I haven’t had the time to fully digest the awesome. I gave it more than one listen, but I’m busy elsewhere; I can’t fully devote as much my time to this one release as I want. With that said, let’s get into Lil B’s self-produced birthday present to himself.

The project is pretty much a double album, length-wise, with 27 songs in total. The tracks all feel like vintage Lil B music, but still feel as new as can be. It’s kind of weird to say this, but Lil B legitimately made a timeless project. The flows–and instrumentals–vary between old-school West Coast vibes, golden age hip-hop, somewhat hyphy energy, and post-Soundcloud rap. That’s to say that there’s a wide variety in sounds and lyrics on here. Now, it’s not as lyrically impressive, for me, as, say, I’m Gay, but it’s still a dope listen. It’s something different in an age of everyone Auto-Tuning the hell out of every syllable and rap-singing about “not trusting these bitches/niggas.” It’s pure turn-up rap that legit sounds timeless (in some ways, somehow) with some different vibes than what you’re used to.
I love the fact that B just doesn’t give a fuck. That’s what makes me say “go check this one out and support dope music in all its forms” for this one, its sheer “I don’t give a fuck”-ness. So, do what that last sentence out and support dope music in all its forms.