Skip to content
Okay, question time. Does anyone remember that time where Tara Strong worked with Tia and Tamera Mowry on a kids-to-tweens cartoon series? Said series was about a group of middle schoolers, their schemes, and their desire to avoid detention? Said series was, somewhat on the nose, named Detention? No? Well, truth be told, you wouldn’t be the only one. Heck, I barely remember it and I used to stay up on everything Tia and Tamera were involved in (childhood crushes can do that to you). 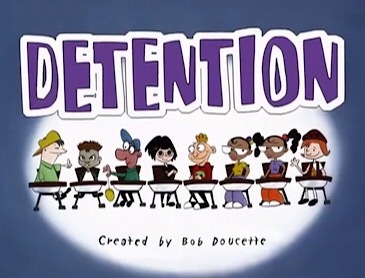 Detention was a short-lived series that launched right around the time that Kids WB! began to transition away from Spielberg-oriented series (think Animaniacs) to stuff like Pokemon and the kiddie dub of the original Cardcaptor Sakura series. Strangely enough, 4Kids wasn’t behind that dub. But, that’s another SOTBNerdy post for another time. Oh, Nelvana Cardcaptors dub, you’ll have your day in the sun. Just you wait.
Airing from late 1999 through early 2000, Detention was, from what I remember, marketed as a big deal. Tia and Tamera were only a few months removed from the final episodes of Sister, Sister and the series featured top-notch voice talent, including the aforementioned Strong and folks like Billy West. However, most of the talent was wasted. The best way to describe it would be The Breakfast Club meets a filler episode of Degrassi meets the worst episodes of Tiny Toons.
In other words, it wasn’t a show that really stood out from the pack of kids-to-tweens cartoons from that mid 90s-early 2000s era of these sorts of cartoons. I mean, a couple years later, we’d get stuff like The Proud Family. Inversely, before Detention, we had classics like Hey Arnold!. Suffice to say, Detention was one of those shows you probably wouldn’t remember–even if, like me, you remember more-random crap than this.
On top of that, the show, from what I remember and from what I’ve seen online in clips, wasn’t all that great. The kids felt like caricatures, everyone had a ‘tude, and who the hell named these kids? The biggest offenders of that last one were the twins the Mowry Twins played. They were geniuses, sure. But, their names were Lemonjella and Orangejella. I don’t know whether to be offended by the “let’s throw something ethnic-sounding in there” quality of the names or if I should be happy that the creators were progressive enough to make two Black girls the brains of the group.

Additionally, the show had a Flying Rhino Junior High meets Histeria type of animation style to it. To put it bluntly, the animation was a bit different. But, it was that bad kind of different. Look at the opening I posted above to see what I mean. Every character looks like they belong in a different series entirely.

I wasn’t the only one who thought that Detention wasn’t all that great, though. The show only lasted thirteen episodes before it was cancelled. It ended up going more quietly than it came, as the show got the Girlfriends treatment (except here, it may’ve been warranted; Girlfriends deserved so much better). It didn’t even get a final episode, just one that seemed like it was a random episode. Then again, most cartoons of this era didn’t get definitive finales, so it was kind of par for the course.

Now, don’t get me wrong: this post wasn’t meant to “hate” on you if you liked this series or did DeviantArt of the characters or what have you. You have your tastes, and I have mine. However, I just think that the show was not only mostly trash, but it was the worst kind of trash. It was the type of trash you, for most of your life, you forget about and only remember if you search the deepest, darkest crevices of your mind next to the dankest of memes.

Until next time, this is your purveyor of the new and the nostalgic who critiques it from a POC POV, SOTB, saying “stay nerdy, my friends.”