Skip to content
Rap-rock is a predominant force in the hip-hop movement. If there wasn’t a “Walk This Way,” it’s possible that hip-hop and rap music wouldn’t have caught on in the wild-fire way they did. Heck, rap-rock and nu-metal helped create legends out of Linkin Park and, for better or worse, Fred Durst. But, for every “In The End,” we got “rappers” who wanted to branch out and flip the script on the rap-rock stereotype. For instance, Kid Cudi’s Speedin’ Bullet 2 Heaven.

However, there’s one album from the past ten-plus years in this genre that stands out as being one of the most-polarizing. Enter Dwayne Michael Carter, Jr. and his 2010 release Rebirth. 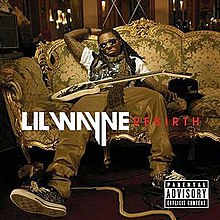 But, for as laughable as the effort could be seen as (I mean, Wayne’s “guitar playing” was usually restricted to a couple strums and/or a few chords being plucked), was it really that bad? That’s where I come in. I’m Speed on the Beat (obviously) and this is Was It Really That Bad Review, where I review the crap so you don’t have to.

In 2009, a year after Lil’ Wayne dropped Tha Carter III, people waited with anticipation to see what their “Lollipop”-singing savior would drop next. People thought he could still do no wrong, even if it was obviously a hoax perpetuated by Lil’ Wayne’s overall discography. But, for every “Pussy Monster,” there was an “A Milli,” so everyone was still on board for the most part. If Wayne skateboarded, many people hopped on that rail. If Wayne still struggled with drug abuse, you got other artists popping his pills. Bad puns aside, because we’re not even halfway through this review, everything was coming up Weezy Fuckin’ Baby (Please Say The Baby).

And, then “Prom Queen” dropped.

Now, let’s get one thing clear: I like Lil’ Wayne. Do I think he’s the greatest rapper alive? No. But, he’s, for the most part, entertaining and can string together a pretty legitimate song when he actually is shown to give a shit about his music and isn’t just doing so-called “art” for art’s sake.

“Prom Queen” was neither entertaining nor legitimate. With guitar riffs straight out of Linkin Park for Dummies and Green Day for Jackasses, Wayne stumbled for close to four minutes on a song that’s highlights included “they loved her fancy underwear/every boyfriend, every year.” The video’s no much better, borrowing heavily from outlets such as “Smells Like Teen Spirit” and teenage horndogginess.

Seriously, Wayne. We get it: you frothed at the mouth over her thongs and wanted to smash. She didn’t let you and such. But now? You’re grown and you’re famous, so fuck her. That’s kind of one of three bases of your songs about the opposite sex. That, the “I’m Lil’ Wayne. I can, while I’m not Drake, still make your feminine nether regions whistle like the Andy Griffith theme song while I pick it better than a gynecologist” trope (seriously, WTF?), and the “I’m Lil’ Wayne and here’s a verse or two about my mom out of nowhere” trope. There, I’ve sumarized Weezy’s “songs about/for women” in a couple sentences.

I could’ve written a better song about my infatuation with–nope, not going down that road again.
Getting back on topic, it was no surprise that “Prom Queen” fell off the charts–and landed on many worst song of the year lists–pretty quickly. People thought the album would be shelved. Wayne, himself, went back to actually rapping (see: “Forever” for an example of what happened when 2009-2010 Wayne seemingly tried). But, then…we got “On Fire” or “that one song where Weezy F. Baby is wailing about a woman ‘creaming’ because Lil’ Wayne.”
Sampling “She’s on Fire,” Cool and Dre actually deliver a pretty legit beat that could’ve been used for something so much better. Wayne could’ve probably actually dropped some amazing lines on here. But, no. We get this dreck and, again, a video that’s more of an excuse for Wayne to show ass and titties and make more “fire/devil” punchlines because it’s avant-garde to make a buttload of “fire/devil” punchlines in a song called “On Fire.” You can’t make this shit up. And I haven’t even gotten to the rest of the album.
The rest of the album, the passable “Drop The World” included, isn’t either putrid in its awfulness nor amazing in its epicness. Instead, it’s…kind of just there. We’re given bland nu-metal stereotype after nu-metal stereotype to the point that Rebirth becomes something completely different. Wayne, just because you have a guitar on a song, that doesn’t make it rock. If it did, I’m pretty sure that we’d consider song Christian R&B tracks to be heavy metal. If a “guitar,” live-sounding drums, and barely coherent lyrics were the only things that made up rock, I’m pretty sure that Creed would still be the top group out. If singing songs about staring at some chick’s panties in a “reflective” tone was all rock was, I’m sure groups like Alien Ant Farm would still be around. I could go on, but I think you’ve got the point.
This is where Rebirth‘s fatal flaws lie. The fact this album even went gold is more of a testament to Wayne’s fans being die-hard loyalists (mostly) than the actual quality of the album. Not only is it boring, it’s borderline offensive to anyone who even remotely subscribes to the idea of rock, rap-rock or otherwise. There’s no way you can listen to this album and not say “hey, Wayne must’ve been zonked out his fucking mind to think that this was even remotely passable.”
…at least he managed to stick to the songs’ topics more than he did on Carter IV. Sorta.