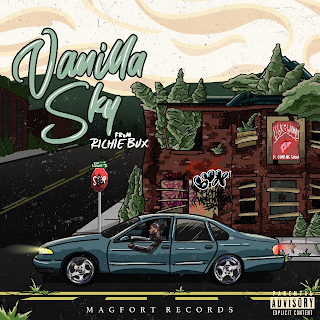 Vanilla Sky is the latest effort from Richie Bux, a Midwest-born, Las Vegas-residing artist. The project is one that mixes a lot of different styles, from homages to icons (such as the heavy-hitting, sample-heavy “Bubbachuck” and its callback to Allen Iverson’s youth) to “player-made” anthems (as the press release for this one calls “Closer”), and lays it all out there for us to digest. Is it an easy swallow?

Most of the time, yes, and that’s partly because of Bux’s ear for beats and his lyrics–which can be related to pretty easily while still having some screwface-ready bars as well. Everyone has been on the come-up in some way, and Bux harnesses that energy to deliver a project that’s pretty easy on the ears and pretty solid in other ways as well. Between the loverboy anthems to the straight-getting-it anthems, the project has a lot of anthem potential if you give it a listen. My main gripe with this project is that, at points, right when the groove is found, the song ends. For instance, I wanted to hear a third verse on “Bubbachuck,” even though I get why he didn’t put one there. So, check it out below and support dope music in all its forms.