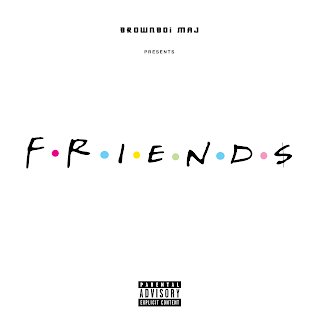 BrownBoi Maj follows up February’s MAJ project with Friends, a nine-track project that shows a further growth from being a “broke boi.” What I enjoyed about this project is the growth of Maj. The subject matter is a lot more diverse than even the MAJ project. While there’s still a focus on making it, there’s a lot of the project that deals with love and the repercussions of love (love for the money and love for a woman–mainly the latter).
The album starts off with dealing with making it and transitions, in a Weeknd sort of way, to dealing with love. The interlude, “Tell Me,” showcases Maj’s vocal abilities in a way that hasn’t been explored much before this project. And from there, we’re taken on a journey of self-discovery. It’s a very relateable project from that side of things. Songs like “Fame” speak on both of these topics in a way that’s a lot more mature than other tracks of this ilk, even though they play around with “trapsoul”/Drug&B tropes.
Sonically, there’s a lot of progression as well. Maj’s beat selection has improved considerably. This allows for Maj and his cohorts to express more emotion and progress. Overall, this is the project Maj needs to catch even more ears past those who think of him as just being the “Broke Boi” and all that. Therefore, I’m here for this project and have to say my thing. Check it out below and support dope music in all its forms.