Skip to content
I’m writing this under the assumption that you’ve seen the series, so I won’t go into a bunch of backstory and the like. HUGE spoiler alert if you haven’t.

Over the past few months, I’ve been on a huge anime bender. Call it the My Hero Academia effect, because since season three ended, I’ve been devouring titles quicker than a little bit. I fell in love with The Promised Neverland, which is superb (shoutout to the homie . I began to revisit Gurren Lagann because you always need some “who the hell do you think I am” in your life. Surprisingly, I’ve also given JoJo’s Bizarre Adventure its fair shake. I know, I know, “read the manga.” I will, eventually. Right now, I’m anime-only. 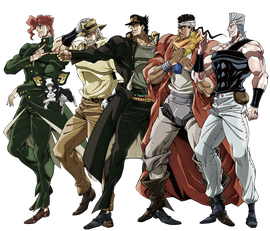 After being inspired by Bennett The Sage and his JoJo episode of Anime Abandon, I watched the original OVA. Apologies to production company A.P.P.P. and series creator Hirohiko Araki, as I saw it via Kissanime (the story behind why it’s not readily available is as bizarre and grandiose as the show itself). It was a perfect encapsulation of ’90s anime, shonen tropes, pop culture references, and balls-to-the-wall insanity. 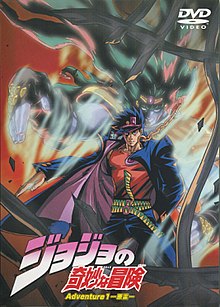 I’d seen the memes of the original OVA and the series proper that began in 2012. However, taking time to watch the series always alluded me.  I began to rectify that by going into Hulu and beginning with Jonathan Joestar’s story.

I’m pretty much through part three, Stardust Crusaders (yes, the one with “ZA WARUDO” and all of the Engrish “OH MY GOD” clips). I’ll probably get crucified by some fans for this, but I think that the Stardust Crusaders arc of JoJo’s Bizarre Adventure isn’t the best. Yes, the series is over the top insanity as a whole, full of hyper-masculine parody that both celebrates manliness, the human body, and spits in the face of what it means to be a “man’s man” (and does it while piercing the heavens in its own way). Stardust Crusaders has that in bunches. It’s probably also the most memeable part of the anime series thus far, it reintroduces DIO, and it’s popular as hell. Plus, it’s an anime send-up of Around The World In 80 Days, but with people trying to kill the main characters every episode, immortal(?) vampires, and manifestations of psyches duking it out and beating the crap out of each other. It’s like , for example, Persona 5, but if Joker was also Kenshiro from Fist of the North Star.

However, all that and I’m still not as enthralled as I was during the first two parts of the show. Truth be told, it could be because I believe Battle Tendency, the second arc, is superior. It’s just as ridiculous as Stardust (Nazi cyborgs, vampire gods turning into ungodly beasts, plot twists, one of the most badass villain themes, brotherhood!!!). However, it also takes the somewhat grounded (in comparison to the rest of the series, from what I’ve heard) nature of the first arc, Phantom Blood, and runs with it.

Now, Battle Tendency isn’t perfect, but it does many of the things that Stardust does and does them better. But where BT shines more versus its more-popular kin is in its protagonist.

Stardust‘s JoJo, Jotaro Kujo, is kind of wooden. I know he’s supposed to be somewhat stoic (he’s based on Clint Eastwood). However, it’s only shown more by the fact that the rest of his cohorts are allowed to express a variety of emotions (hi Polnareff). Jotoro is a delinquent badass who usually solves his problems by outpunching his enemies. Like I said above, he’s a plethora of shonen tropes personified.

Sure, his Stand, Star Platinum, is pretty much purple Saitama with Goku hair (that counts for something) and he’s easily recognizable. From the first episode of the arc throughout, though, he’s kind of just there to beat the crap out of someone, get information on where DIO is, find someone related to DIO, and repeat. There wasn’t much growth to him in this arc. Maybe that comes more in his subsequent appearances in the series, but here? He’s wooden and I find myself giving more of a damn about everyone else within the Joestar Group. 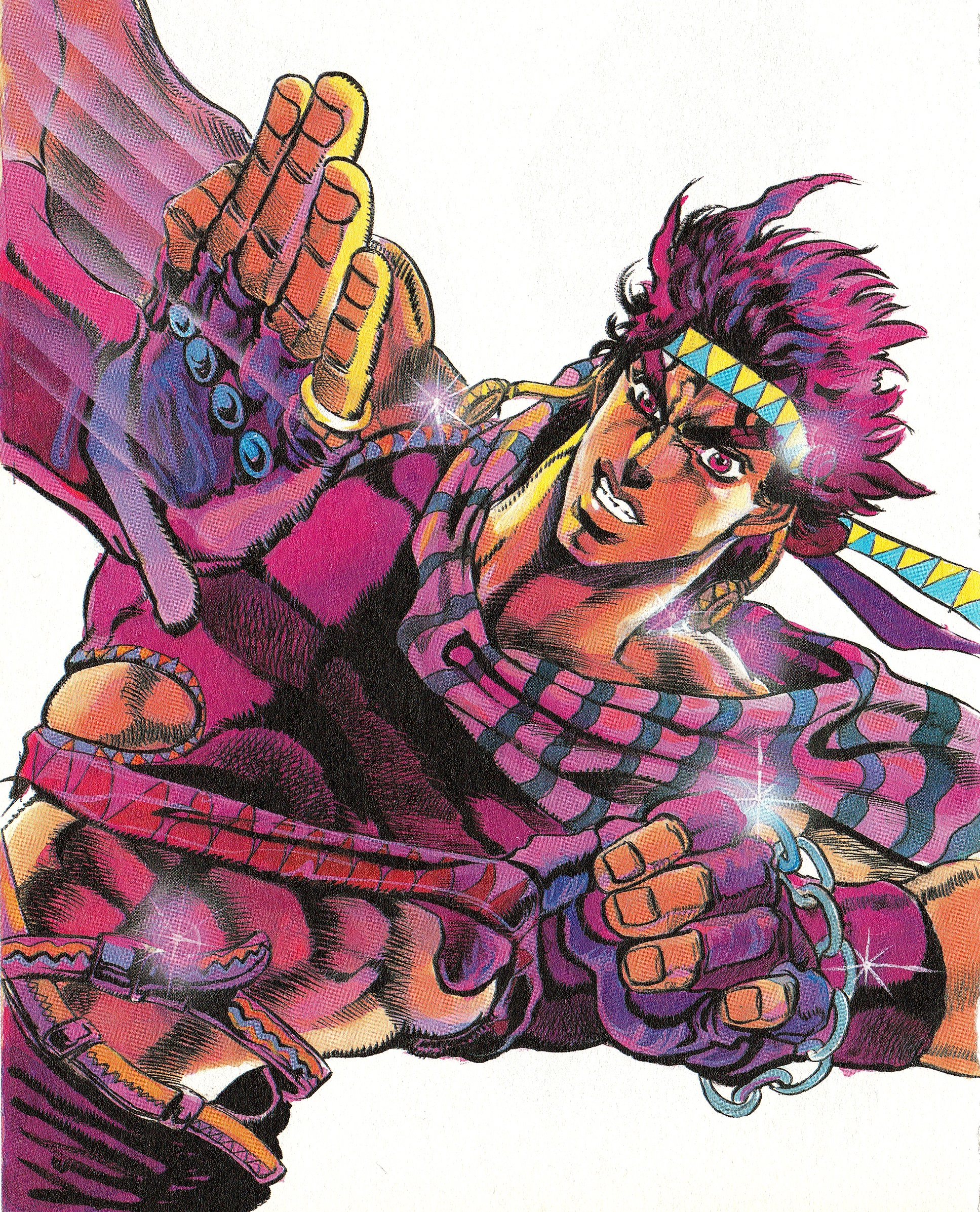 From his introduction through the end of the arc, he grows and matures. He becomes a more-complete person. Joseph kind of starts out as a cocky, fight-first young man who relies on parlor tricks and Hamon-amplified strength to get over on his enemies. By his final fight with Kars, he’s out there devising strategies (somewhat), utilizing his Hamon in inventive ways (such as using his clackers as boomerangs), learning from everyone around him–including the Pillar Men, and just being an overall more engaging protagonist than ’80s action hero send-up Jotaro.

Hell, even Old Joseph is more entertaining as a character than Stardust Jotaro. Joseph shows restraint, even in anger, because he respects his opponents’ fighting spirit (Caesar and Wamuu, for example) and/or he doesn’t want to disappoint Granny Erina. Jotaro would’ve just called Erina an old woman, “yara yara daze’d” and moved the hell on to punch someone in the face as hard as he could. If Jotaro is a tank, Joseph is a tank with a sniper attached to it. A tank with a sniper who sometimes still runs away, but a tank with a sniper nonetheless.

Maybe it has something to do with Jotoro being kind of a reluctant hero when compared to Joseph. We’re introduced to Jotaro as not wanting to hurt anyone because he’s “possessed” by Star Platinum. He pretty much only begins his journey to defeat DIO because Holly, his mother, has a Stand manifest and it slowly begins to kill her. Joseph is, from the first moment we see him, ready to kick ass in the name of justice (see the cops he takes down for Smokey Brown).

Now, Joseph is also kind of a shonen archetype, but one that is allowed to breathe more and become more than just the plucky, lucky lead. He’s like, if we want to be modern, Deku and Goku put together minus the OP factor. He sometimes seems stupid and careless, but he’s very calculating and intelligent. He shows a wide range of emotions and, even when he’s old as dirt, he’s still a competent JoJo/component of the Joestar Group.

Don’t get me wrong. I like Jotaro. I like Stardust Crusaders. However, I’d suggest people start with the Phantom Blood/Battle Tendency season before jumping ass-over-teakettle into Stardust Crusaders because Joseph makes up for the blandness of Jonathan in spades and is more developed than Jotaro (again, thus far). If Jonathan is the white-meat babyface, Joseph is the face with an edge and Jotaro is the “cool” tweener that seems edgy but loses opportunities for character growth because he’s characterized as so damn edgy.

Joseph Joestar is pretty much any incarnation of Daniel Bryan. He’s not necessarily the strongest, but he’s one of the smartest.

I may have revisit this Jotaro versus Joseph debate when I finish Diamond is Unbreakable.