Skip to content
Over the past few months, I’ve taken a deep dive into anime readily available on services such as FunimationNow and CrunchyRoll. I have subscriptions, so I might as well use them. After watching Evangelion, I began and finished Serial Experiments Lain. While I may talk about Lain at a later date, the TL;DR version is that I felt like I needed more brain bleach than with Eva. After that duo of psychological thrillers, I felt I needed something a bit less mentally taxing.

That brings us to today’s series, Welcome to the NHK.

I began Welcome to the NHK years ago, when it was on Netflix. I liked the premise, as it is about a schizophrenic hikikomori named Tatsuhiro Sato and his desire for a normal life. While I’m not schizophrenic, nor a hikikomori, I empathized with the character. The slice-of-life-esque series detailed all the trials and mishaps that went along with that strive for normalcy. There was comedy, but also a great deal of drama. However, there was a twist. A young woman in his neighborhood, Misaki Nakahara, plays his therapist while having her own entire set of problems.

It was charming, but there was something about it that put me off of it for a while.

I stopped watching NHK because an episode early on showed Sato and his neighbor, Yamazaki, take creeper shots. This was to gather research for a “gal game” they created. Said game was part of Sato’s hikikomori treatment, Misaki advised he find something that’d get him out of the house. While I’m no prude, the episode rubbed me the wrong way, which was probably the intention. By the time I was ready to embark on it again, Netflix removed it from their library.

For years, I searched for the series until stumbling upon it after finishing Lain. Skipping a chunk of the aforementioned episode, I began the series again. What I found was that Welcome to the NHK was a beautiful series that treated its characters–and their mental health–realistically. The team behind it was humane and smart about presenting the characters’ issues–even through the sight gags and jokes about Sato’s nature, Misaki’s upbringing, and Yamazaki’s severe otaku tendencies.

Sato, while a hikikomori, wants and needs to belong and be a part of something bigger than himself. This, unfortunately, lead him to latch onto anything and anyone who seems to show him a bit of affection and/or sympathy. From his high school senpai/possible former hook-up buddy Hitomi (whose own mental concerns and dilemmas are critical to Sato’s development) to his later involvement in a pyramid scheme, Sato moves from group to group in search of something deeper. While there was comedy–and a great deal of it–there is also a bittersweet sadness that undercuts the hilarity.

We are instructed to laugh at Sato getting into shenanigans, but also see how messed up it is that people take advantage of his desire to belong. Viewers can laugh at his failures, but then ask themselves “is it okay to laugh? This is actually quite horrible.” A part of us could love to see Misaki and Sato interact, but then worry about their codependency issues. And no, that’s not even a spoiler. From their first interaction, it’s apparent that they “need” each other in a potentially unhealthy way.

Additionally, we could root for Yamazaki and Sato to sell their gal game like hotcakes (they worked quite hard on it, considering everything that transpired throughout the series). At the same time, you may cringe at the things they did to finish the game. You may want to say “haha Yamazaki is an otaku,” but then you get smacked with a scene where he shows genuine emotion and you feel bad.

For example, there’s a scene later in the series where Yamazaki berates a classmate to get a reaction. It’s not exactly a set up, though, since there are multiple reasons behind his “reasoning.” Whether or not they are correct or just, that’s left up to the viewer. Essentially, the black comedy of the series is used to also give us a look into the thought processes of those with mental health disorders, otaku, and people who want to be desired. However, none of these people are all that desirable. 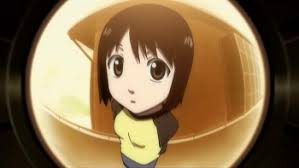 No one in NHK is without flaws or problems. However, as much as they acknowledge their flaws, they still continue to indulge them at times. This made the romances toxic. This, again, makes the comedy less “funny haha” and more “funny ha…ha…oh crap, I shouldn’t really be laughing, should I?” It makes the characters fleshed out and human. People often get to a point where we know we shouldn’t do something, but we continue because it’s easier than changing. That’s part of the excellence of the series.

The ending, which I won’t give away, is dark and very bittersweet. In fact, it gives us a conclusion that shows a bit of progress, but progress that could easily fall apart at the seams at a moment’s notice.

That said, if you wish to check out a character study of flawed people and mental illness, Welcome to the NHK is definitely worth a watch. Like real-life struggles, nothing is just wrapped up in a neat little bow.

One thought on “SOTBNerdy: Let’s Talk Welcome to the NHK”