Skip to content
Ed. Note: I know I said I wasn’t going to make SOTB “political,” and I’m not. I don’t have the energy to talk about nothing but politics and all that. But, at the end of the day, I’m a Black man with a Black family and Black children. To avoid talking about some of these issues would almost be like avoiding talking about my Blackness. Moving forward, there will be pieces that speak on race relations and other issues from time to time. Don’t worry, it won’t be every piece. However, SOTB is about getting to know the person, not the persona. To not talk about Blackness and POC issues is almost like denying readers a part of me.
Colin Kaepernick, even if he never plays another down for as long as he lives, won the war. He got the NFL to settle with him on his collusion case. Now that the war’s over, the NFL can pick up the pieces of a shattered image brought on by their reactions to Kaepernick’s protesting. Right? So what now? 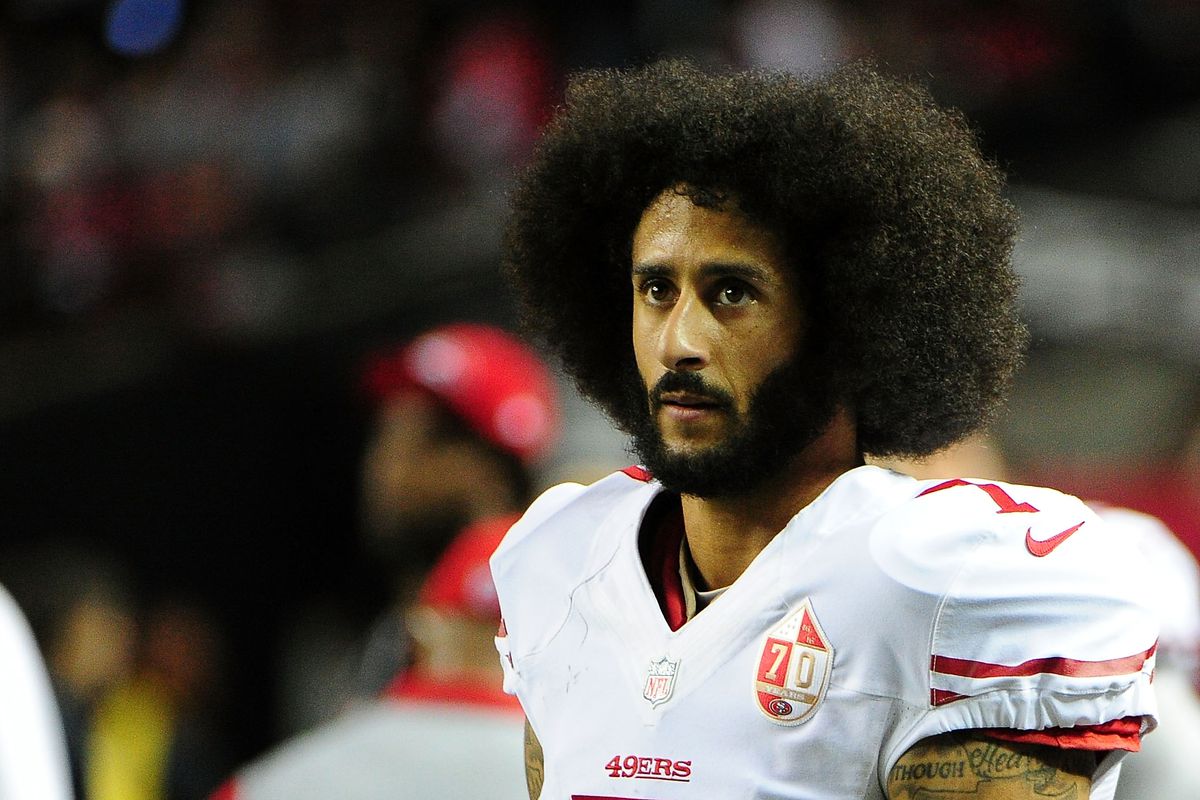 Should Colin Kaepernick be allowed back into the NFL isn’t the question people should ask. Yes, he’s still young and could, at least, play backup if the blackballing ceased. Yes, it’s blackballing when you’ve got Nathan Peterman and Mark Sanchez still getting chances in the league. Hell, Josh Johnson didn’t play on a team for four seasons and, somehow, he got a call from the Redskins over Kaep. Truth be told, there’s no real excuse for him not to be in the league in some capacity, even if his last season was, admittedly, not all that great in terms of wins and losses. Even with that, he still managed to throw 16 TDs against four interceptions in 2016—while kneeling and being a “distraction.”

Speaking of the D-word, the question also shouldn’t be “would he be a distraction” if he were back in the league, either. If we want to be honest with ourselves, while everyone may not agree with Kaepernick’s ideals, they’re a lot less “distracting” than the other shenanigans the NFL has allowed over the years. In a league where rapists and alleged rapists, abusive players (unless you’re Ray Rice, oddly enough), drug abusers, and other folks get second–and sometimes third–chances, a man protesting police brutality and racism should be an afterthought in terms of “distraction.” I mean, Patriots owner Robert Kraft was arrested for soliciting sex, for crying out loud.
You’d think Kaep would be less “distracting” than a seventy-seven-year-old billionaire giving the league yet another black eye. You’d also think that a seventy-seven-year-old billionaire wouldn’t want to get involved with an alleged sex trafficking ring. But, as I’ve said time and time again, stranger things have happened.
People forgave Michael Vick for his hand in the Bad Newz Kennels controversy (and we all know how people love their dogs). Even he was in the league for seven seasons after his jail stint. By some people being so adamant about saying “screw Kaep,” are they saying Black and Brown lives matter less than a dog’s life? Are they saying police brutality is less of an issue than dogfighting? While both are horrible, it kind of looks like some folks are siding this way. Even if that’s not exactly what people are saying outright, by being so against Kaepernick getting another shot, that is a fair inference.
Now, I know people often watch sports to escape life’s sometimes harsh realities. Kaepernick’s protesting–and those who followed in his footsteps–brought reality into the field. People deal with police brutality and racism constantly. Sometimes, people may choose to ignore that because they are issues that can’t be neatly solved, especially when racism’s roots run deep. Sometimes, people may want to be like Ralph Northam and say “I’m not racist even though I bask in my White privilege and do stuff that screams ‘racist AF.'” I understand that. Again, racism, while simple–in other words, don’t be racist–is also a complex thing, an ascribed trait.
I even understand how some may take kneeling during the anthem as offensive. I don’t agree with ignoring racism and police brutality. Nor do I see the kneeling as offensive, even as a man whose father served in the Armed Forces during a segregated era and have other friends and family who’ve served. Let’s remember that an Army vet, former long snapper Nate Boyer, suggested that Kaepernick kneel to protest. However, I understand why some people choose to not acknowledge those issues everywhere they reside, especially during a sporting event.

In short, the question should be “why is it that Kaepernick is persona non grata while countless other players, coaches, etc. constantly do dumb, dangerous things and get to come back?” It’s not like Colin Kaepernick got caught snorting cocaine in Vegas…or got charged with using his car as a deadly weapon…or got caught with an assault rifle…or went on his Adam “Pacman” Jones tip…or…well, you get the point. That’s the thing that’ll always rub me the wrong way about how Kaep’s situation played out thus far, even though he and Eric Reid secured the bag or whatever. Well, that and the co-opting of kneeling to fit twenty different agendas.
I don’t need Kaep to instantaneously be named starter for all 32 teams and have all opposing defenses purposely let him rack up 30,000 yards next season or anything. I don’t need Roger Goddell to award him 10 Super Bowl rings just for the hell of it (Goddell is another story for another day). I just think he rightfully deserves another shot and the NFL and those who may not agree should give it to him. Judge not lest ye be judged and whatnot. But, it’s almost as if protesting racism and crooked law enforcement is worse than the things I’ve listed above. It’s almost as if saying “hey, Black lives matter” is worse for some fans than, oh, I don’t know, robbery, rape, or murder.
I mean, damn. The man isn’t Rae Carruth. Then, I could see you saying “screw him.” Besides, the  whole “let’s stand for the anthem at sporting events” thing kind of has its roots in patriotism and it becomes a bit of a marketing ploy to get people hyped up on some Team America: World Police energy. That’s also another story for another day.
In short, to paraphrase NFL great Keyshawn Johnson, just give Kaep the damn ball.